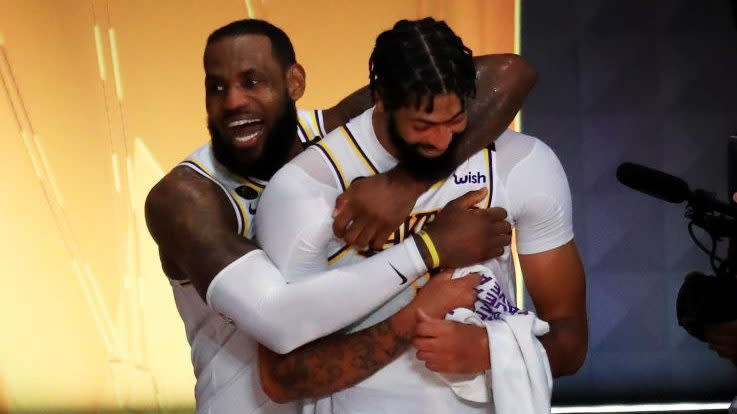 We are more than 75 signings into free agency, and surprisingly most of the deals are either ones I think are good, or at least are defensible from the team’s perspective. There is a notable signing I don’t like, and nobody seems to have an idea what the plan is in Detroit, but for the most part teams have signed players they need on reasonable contracts. Beyond that, there has been a flood of trades, and the NBA Draft proved interesting.

But which NBA team had the best offseason? Who improved the most?

Here are our five NBA teams that made big steps, had the best offseason and improved the most in the past weeks.

The Lakers’ improvement is not dramatic but incremental. However, when you’re talking about the defending champions with LeBron James and Anthony Davis on the roster, getting better at all makes them that much harder to knock off the mountain top next July.

The Lakers traded for Dennis Schroder, who is an upgrade as a point guard and secondary shot creator over Rajon Rondo. Schroder is a better scoring threat and will space the floor better as a shooter. Along the front line, the Lakers have Sixth Man of the Year Montrezl Harrell and former Defensive Player of the Year Marc Gasol, an upgrade over Dwight Howard and JaVale McGee. Harrell brings incredible energy when he steps on the court, and Gasol is the kind of high IQ player who thrives next to LeBron. On the wing, Wesley Matthews replaces Danny Green, which keeps a good defender and respected shooter in the role.

The Lakers improved their bench and lost nothing in the starting group (so long as Gasol, 35, and Matthews, 34, don’t feel the effect of age too much), and last year’s version already won a ring. Any list of favorites for the next NBA season has to start with Los Angeles, and every other team is targeting them.

Check out the latest news on the Los Angeles Lakers

The order came down from ownership: It’s time to put a roster around Trae Young that isn’t just about rebuilding but can make the playoffs. Hawks GM Travis Schlenk has done that.

First, the Hawks drafted Onyeka Okongwu, the defense-first, high-energy big man out of USC who can back up Clint Capela at center (and you could argue Capela is a new addition because the strong pick-and-roll center never played a minute for Atlanta before the coronavirus shutdown last March). Then in free agency, the Hawks used their cap space to grab Danilo Gallinari, one of the league’s better stretch fours and another player who will space the floor. They likely added Bogdan Bogdanovic at the two guard, a perfect fit as a secondary playmaker with size next to Young (Sacramento can still match Atlanta’s four-year, $72 million offer, but likely will not).

Atlanta’s numbers fell off a cliff last season whenever Trae Young sat, now the team has Rajon Rondo and Kris Dunn backing him up, providing better floor generals and, in Dunn’s case, a strong defender.

The Hawks may not be done (don’t be surprised if John Collins is on the move, those rumors are flying around the league), and defense is still going to be an issue, but this is a much better team. Atlanta is a playoff team in the East — and one that will be entertaining to watch.

Like Atlanta above, another team that made bold moves to leap into the playoff picture next year, something encouraged by the Suns’ 8-0 bubble run (that said, they likely are a bottom-four playoff team in the West, the conference is ridiculously deep).

The big move was trading for Chris Paul, bringing the best floor general of a generation and an intense competitor who can change cultures to the Valley of the Sun. He will make players around him better — Devin Booker somewhat, but more Deandre Ayton and the role players — and push the team not to settle for less. Phoenix also made a smart move picking up Jae Crowder in free agency, the kind of solid veteran presence this team needed.

Phoenix was already poised to make a leap next season, but adding CP3 to the mix makes them a dangerous team in the West.

The Clippers may have lost the energy and passion Harrell brings, but his limitations on defense — and how that can be exploited — were evident when the Nuggets came back from 3-1 down and sent Los Angeles home from the bubble.

Serge Ibaka is an upgrade in terms of versatility and playoff fit. He can protect the rim, body a big like Nikola Jokic (as much as anyone can slow him), plus he can guard out on the perimeter. On offense, he can space the floor from three and get buckets inside. The Clippers also kept Marcus Morris — who played well for them in the postseason — and they upgraded backup shooting guard with Luke Kennard.

The Clippers also switched coaches to Tyronn Lue. He may not be an upgrade over Doc Rivers, but he’s on that elite coach level and brings a different voice and focus to a roster that needs to find the chemistry that eluded a talented roster last season.

For years the feeling has been the same: Damian Lillard and CJ McCollum are an amazing backcourt, but is that enough? Then a few years back Jusuf Nurkic came on board, adding strong passing and a presence in the paint, and while that got them to the conference finals the issue was still a lack of defense and depth on the wing.

Portland added Robert Covington to the mix and he is the high-level 3&D wing this team needed. Mix in a re-signed and healthy Rodney Hood and suddenly the wing play for Portland looks pretty good. Portland also re-signed Carmelo Anthony, and while the future Hall of Famer will see a reduced role (especially with Zach Collins healthy), his presence helps this team.

Portland filled weaknesses and got better. In a West loaded at the top (Lakers, Clippers, Nuggets, plus Dallas and Utah looking to leap up to the top four, Golden State getting healthier, and the list goes on), it’s not going to be an easy season for the Trail Blazers, but this is a team that can do some damage in the West.

Honorable mention: A case can be made that the Milwaukee Bucks belong on this NBA best offseason list with the addition of Jrue Holiday, a true upgrade. However, losing George Hill, Wesley Matthews, and Robin Lopez — then missing out on Bogdan Bogdanovic — makes us question how much better the Bucks really got. If Torrey Craig and Bryn Forbes step up this will be a better team, but we’re going to need to see it.

Which NBA team had the best offseason? Five teams who improved the most. originally appeared on NBCSports.com