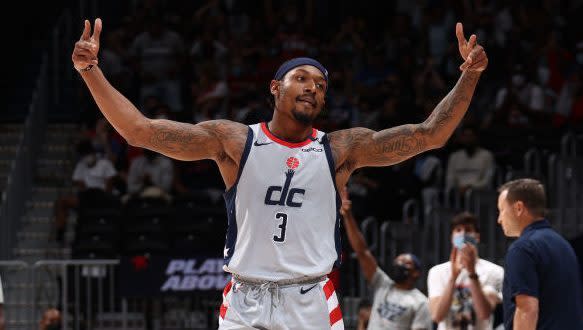 The biggest question around Bradley Beal right now is whether he will sign an extension on his contract with the Wizards, or if he will force a trade. (He technically could pick up his $37.3 million option for 2022-23, but that is unlikely at best.)

Beal isn’t answering that question right now, although the Wizards are optimistic he will want to stick around after an offseason where Russell Westbrook was sent out, and a lot of quality depth was added to the roster.

The question Beal is answering? What he’s working to improve this offseason. Here’s what he told Chase Hughes of NBC Sports Washington.

“You know I need to shoot more threes. You probably say it all the time. And, obviously, make them. I have to make them.”

Beal attempted 6.2 3-pointers a game last season and hit 34.9% of them, both numbers that are down from previous seasons. Beal still scored 31.3 points per game, but he shot more from inside the arc, particularly short midrange/floater range shots. He was attacking, he was more focused on setting up teammates (although his assist percentage dropped as well), and he was the primary focus of opposing defenses, which led to more off-the-dribble threes (Beal is better at catch-and-shoot).

Beal being the head of the snake in Washington and the focal point of defensive gameplans will not change. What does change is the talent around him. Spencer Dinwiddie — if healthy and himself again — can take on some of the playmaking duties and let Beal work off the ball for catch-and-shoot opportunities. Also, there will be much better spacing around the court with Kentavious Caldwell-Pope, Kyle Kuzma, Aaron Holiday, and rookie Corey Kispert keeping defenders honest from distance.

All of that should lead to an improved Wizards team — and a big season from Beal. Especially if he is nailing deep threes.

The contract extension question will wait until another day.

Check out more on the Wizards

What is Bradley Beal working on this offseason? “Deeper threes” originally appeared on NBCSports.com