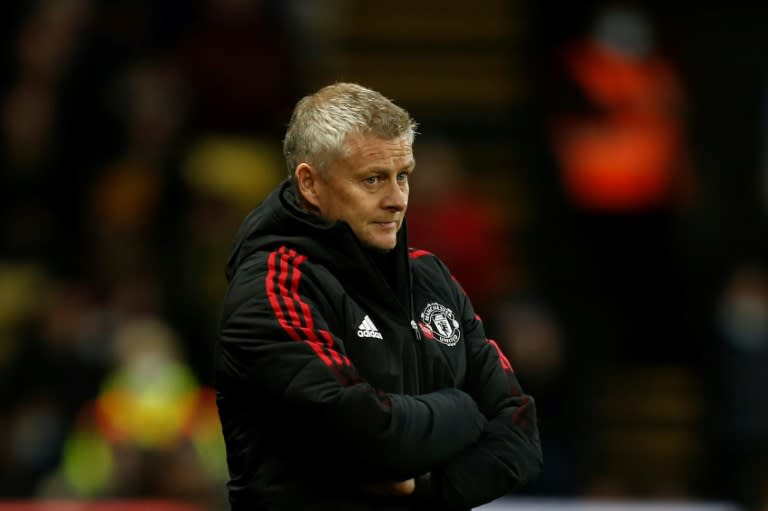 Ole Gunnar Solskjaer’s job was hanging by a thread after 10-man Manchester United slumped to a 4-1 defeat against Watford on Saturday.

United’s fifth defeat in seven Premier League matches ramps up the pressure on the Norwegian manager to extreme levels as club bosses decide whether to pull the plug on his reign.

They were out-fought and out-thought by Claudio Ranieri’s feisty Watford side, who came into the match after losing four out of their past five Premier League matches.

Watford dominated the first half and thoroughly deserved their two-goal lead at half-time, courtesy of goals from Joshua King and Ismaila Sarr.

The visitors pulled a goal back early in the second half through substitute Donny van de Beek but could not find an equaliser and captain Harry Maguire was sent off with just over 20 minutes to go.

Vicarage Road was gripped by early drama when referee Jonathan Moss pointed to the penalty spot in the sixth minute after United midfielder Scott McTominay bundled King over in the box.

Sarr’s weak penalty was saved by the Spaniard but Kiko Femenia fired home from the right side of the box only to see his goal ruled out by VAR for encroachment into the box.

Watford looked the more dangerous side as the half wore on, with United struggling to establish any semblance of control despite playing two holding midfielders in McTominay and Nemanja Matic.

They took the lead they deserved when King side-footed home a cross from the impressive Dennis.

King should have doubled the lead with a free header from the centre of the goal but De Gea made a straightforward save.

Watford got the second goal they so richly deserved just before the half-time break when Sarr made up for his earlier penalty miss to slot past De Gea from the edge of the box.

Solskjaer waked down the tunnel at the break assailed by chants of «You’re getting sacked in the morning» as he desperately plotted a way back into the match.

He threw on Van de Beek and Anthony Martial for Marcus Rashford and McTominay and United suddenly found some rhythm.

They were level in the 50th minute when Van de Beek headed home from close range after a headed pass from Cristiano Ronaldo.

Suddenly United were playing with more freedom and fluency. Bruno Fernandes fired wide before Watford goalkeeper Ben Foster produced a superb save to deny Ronaldo when he was through on goal.

But they could not find another goal and Magiure was sent off in the 69th minute for a challenge on Tom Cleverley.

Pedro scored from a tight angle to beat De Gea to make it 3-1 and Dennis struck home from the right side of the box to send the Watford fans into ecstasy.

The Red Devils are now 12 points behind leaders Chelsea and risk losing touch with the top four.

Solskjaer was without 20-year-old Mason Greenwood, who has tested positive for coronavirus. He will now have to undergo a period of isolation during a crucial period for United.

United face a crunch Champions League trip to Villarreal on Tuesday before travelling to Premier League leaders Chelsea next weekend.

But there are now serious doubts over whether Solskjaer will remain in charge.