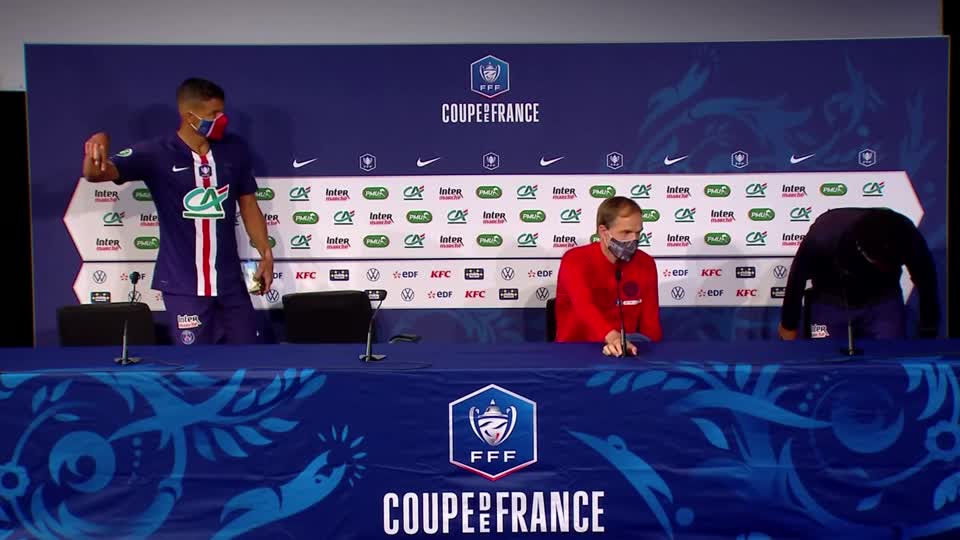 «He took a hit here, it’s impossible to do sprints, and with Kylian (Mbappe), everyone saw that. No news about that injury. I am very, what can I say, it’s the third consecutive match against St Etienne, it’s the third red card, it’s the third time in the first 30 minutes. It’s not because they’re tired, or something like that. If we play like this in the final, I’m very surprised. It’s not good news for us. I’m very happy, of course, that we won, it’s now necessary to stay calm and be patient as there’s no news.»

4. (MUTE) STILL PHOTO OF MBAPPE BEING ASSISTED OFF THE PITCH

8. VARIOUS OF PEOPLE LEAVING AFTER MATCH

«There is everything you need, even for me, I lowered (my mask) a little bit, and I was reprimanded, because I had to put it back, and they are right. In any case, in terms of COVID-19, it’s fine, but in terms of the atmosphere of the game, it’s shit — sorry.»

10. PEOPLE WALKING OUT FROM INSIDE STADIUM

STORY: Paris St Germain’s Neymar struck early to secure a 1-0 win over 10-man St Etienne as they claimed a record-extending 13th Coupe de France on Friday (July 25) in a near empty stadium as French soccer came out of a four-month break due to the COVID-19 pandemic.

The Brazilian scored on the rebound in the 14th minute after PSG fellow forward Kylian Mbappe sprinted clear and saw his shot blocked by goalkeeper Jessy Moulin, with only 5,000 fans in the 80,000-seater Stade de France due to strict health protocols.

The atmosphere in the run-up to the first professional game in France after the long hiatus was far from festive with only a handful of people around the stadium before the match.

Loic Perrin’s rough tackle in the 26th put Mbappe out of the game. The St Etienne captain was sent off in his last game and four other players were booked as tempers briefly flared.

PSG coach Thomas Tuchel was angry with the way St Etienne had played from the start but said he was happy they won the final.

Ben Askren: ‘I’m a dumbass’ for getting caught by Jake Paul’s knockout punch