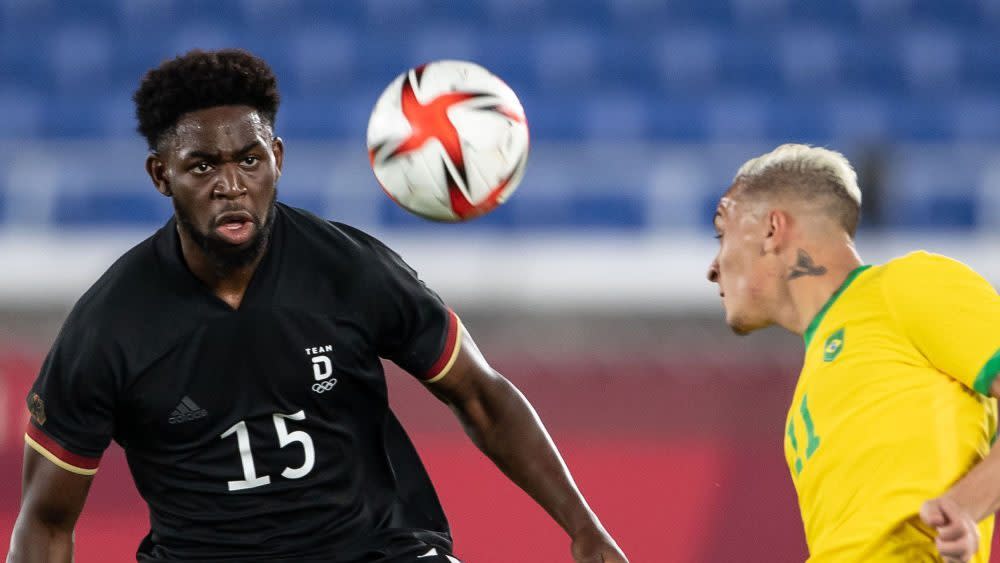 There are more transfer rumors in Europe than those involving big names like Kylian Mbappe, Cristiano Ronaldo, and Saul Niguez.

An MLS star breakout star is on the move (after the playoffs) and a big, young Bundesliga back may just move Tyneside.

Twenty-four year old Jordan Torunarigha reportedly wants out of Hertha Berlin, and Newcastle United is being linked as a landing spot.

There’s a problem for the Magpies, though. Well, a couple! For one thing, Atalanta and several Bundesliga clubs are said to have interest in the left-footed giant.

For another, he’s expected to fetch $10 million or more and Newcastle was said to have balked at a $5 million loan fee for Man United’s Axel Tuanzebe.

Now $10 million would also make a decent young defender property of Newcastle, so there’s that, and Torunarigha has really shown glimpses of greatness at times in his young career.

He played all three of Germany’s matches at the Tokyo Olympics and has a lengthy career in the youth national team set-up.

This one’s a done deal, as New England Revolution star Tajon Buchanan has signed for the Belgian outfit and will head there in January.

The former Syracuse University star, 22, has six goals and five assists in 17 games for New England this season and a goal and three assist in nine caps for Canada.

Multiple reports say the deal is worth around $7 million and includes a sell-on clause. Brugge had signed USMNT player Owen Otasowie from Wolves late last week in a deal worth closer to $5 million.

Club Brugge is second behind Eupen after five matchdays of the Belgian Pro League season. They’re again in the Champions League group stage and will face long odds to make the knockout rounds, but January could see another North American in Europe.

Will he be bringing an MLS Cup ring with him? Bruce Arena’s Revs has a 7-point lead on the field for the Supporters’ Shield, and should be well-positioned for the MLS Cup Playoffs.