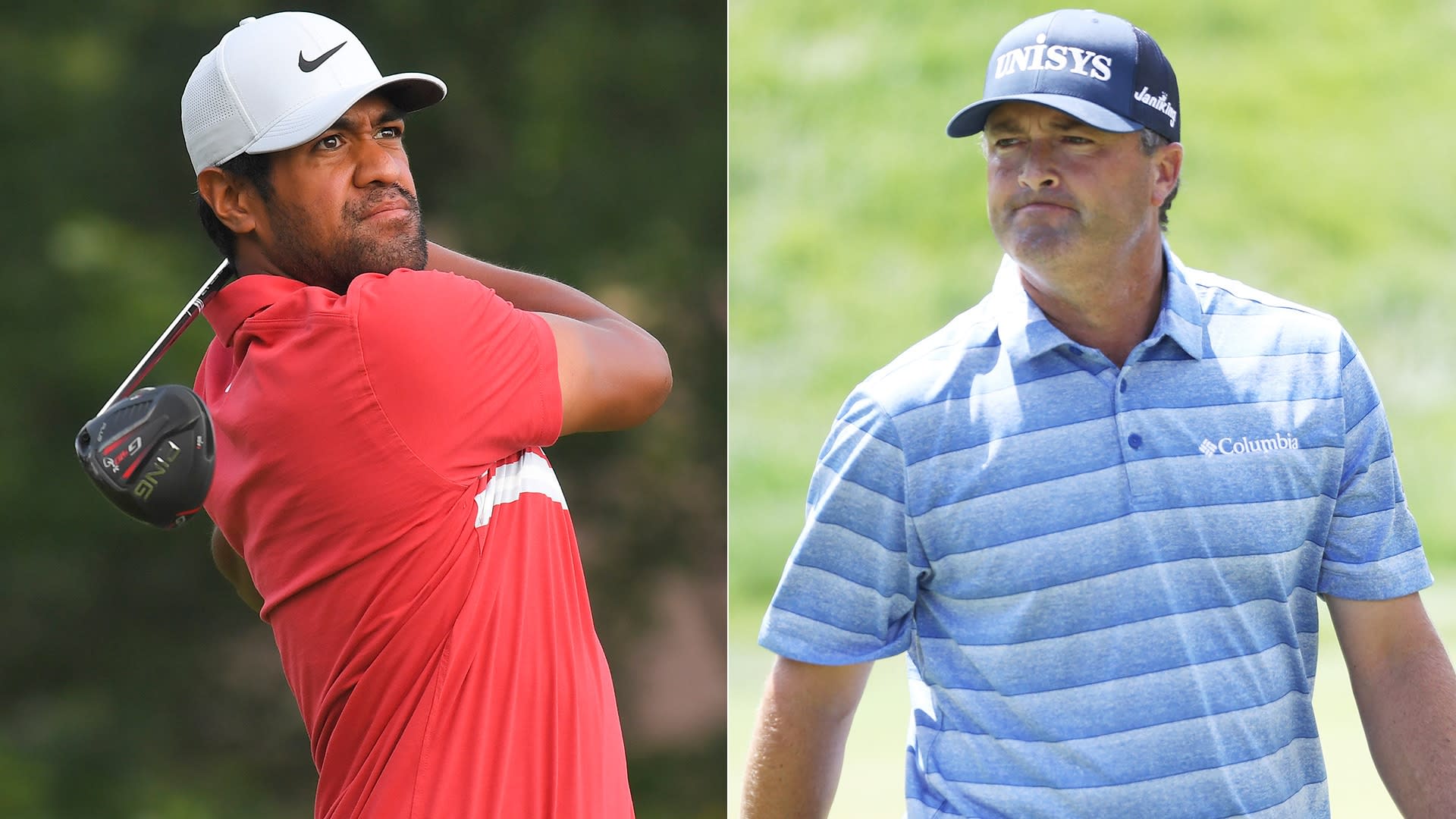 The inspired and the inspiration produced disparate second rounds Friday at the Memorial Tournament, as Tony Finau fired 3-under 69 to join Ryan Palmer atop the leaderboard at Muirfield Village while Bryson DeChambeau, thanks to one disastrous hole, will be leaving Dublin, Ohio, earlier than expected. Here’s what you need to know:

What it means: Finau talked earlier this week about being inspired by DeChambeau’s recent distance gains. Last week during a casual round back home in Utah, Finau reached 206 mph ball speed on a drive, which he posted a video of on social media. Finau’s 320 yards per drive through 36 holes was 30 yards shy of DeChambeau’s 350 average, but Finau is also in position to win this weekend at Jack’s Place, adding five more birdies Friday to reach 14 total for the week. DeChambeau, meanwhile, recorded a quintuple-bogey 10 on the par-5 15th hole that began with an errant drive into the water. The double-digit score proved to be the difference for DeChambeau, who at 5 over missed his first PGA Tour cut since last fall’s season opener at Greenbrier and snapped his top-10 streak at seven.

DeChambeau isn’t the only star missing the weekend, either. In an event that featured 43 of the world’s top 50 to begin Thursday, several big names joined the trunk-slamming DeChambeau, including Sungjae Im (+4), Rickie Fowler (+5), Webb Simpson (+6), Hideki Matsuyama (+10) and Dustin Johnson (+16).

Round of the day: A handful of players posted 6-under 66 Friday, including Viktor Hovland, who birdied six of his first eight holes and ended up climbing into the top 10 at 4 under, where he is joined by Jason Day, Jordan Spieth and Patrick Cantlay, among others.

Best of the rest: Despite some notable players missing the cut, there are still some top talents in contention, including Rahm and Justin Thomas, who each fired 67 in Round 2. Rahm is just a shot back while Thomas, who lost in a playoff last week, is lurking at 3 under. A shot behind Thomas is world No. 1 Rory McIlroy, who shot about as impressive a 72 as anyone ever, making four birdies and an eagle while also carding four bogeys and a double.

Biggest disappointment: For much of the day, this could’ve been a variety of players. Johnson, on his way to an 80-80 showing, certainly was a prime candidate. So were Tiger Woods and Brooks Koepka, who shot 76 and 75, respectively, and barely made the cut at 3 over. But as the second round drew to a close, it was DeChambeau earning this dubious honor, hitting his tee ball into a creek, piping two 3-woods into someone’s yard and eventually sabotaging his week with a quintuple-bogey 10.

Shot of the day: This shot to 8 feet set up McIlroy’s eagle at the par-5 fifth. It also ended up closer than any of McIlroy’s full wedge shots on Friday.

Quote of the day: “I was wondering if I could hop the fence and hit it?” – DeChambeau