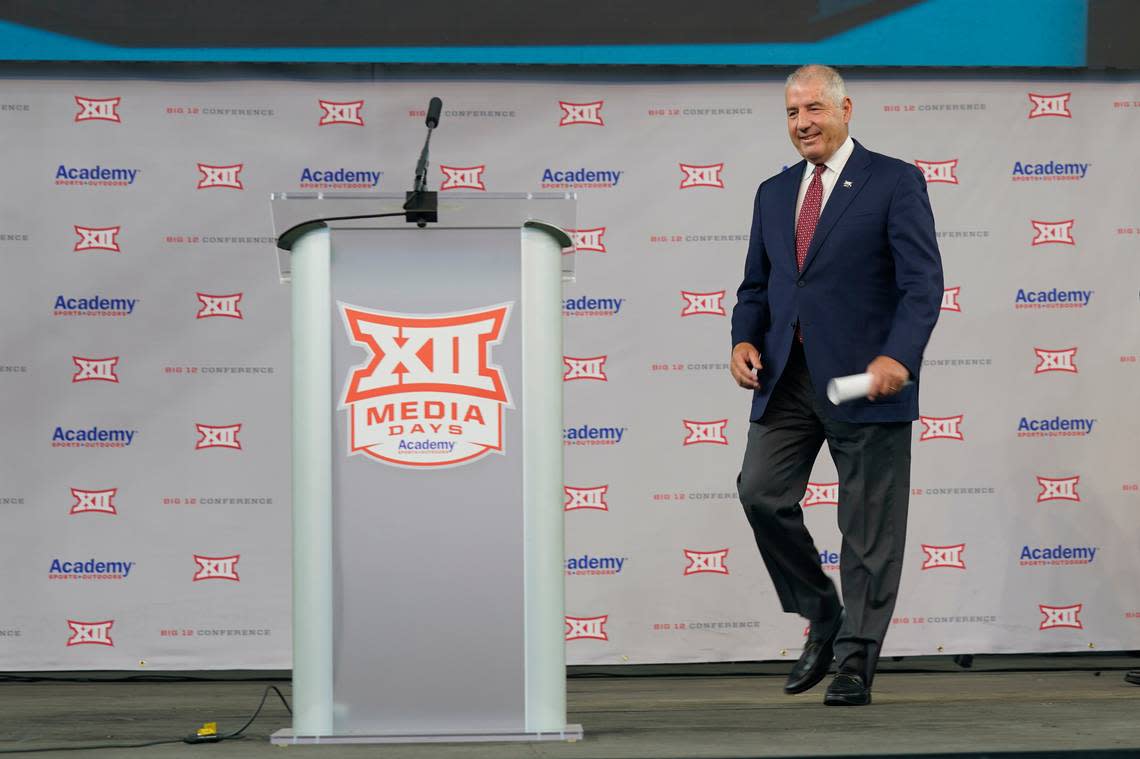 The Pac 12’s “handshake” deal alliance with the Big Ten and ACC amounts to a tall glass of “Hogwash.”

“Hogwash” is the description used by a college athletics administrator who dared not go on the record because the people involved in this toilet-paper alliance are his friends.

The start of the 2021 college football season is here, and the awkward state of the Big 12 will be one of the more intriguing stories that will be more interesting than the games.

Texas and Oklahoma have announced they are divorcing the league … in three years. Looking forward to those Big 12 family Christmas cards.

This is the sort of preposterous relationship that reality TV producers lose sleep over trying to create; the train-wreck content that people don’t want to watch, but do inevitably.

As college athletics moves forward, the Big 12 is not going to receive any help from the outside. The ACC/Big 10/Pac-12 “hogwash” alliance left out the middle earth’s biggest conference for a reason.

Schools like Texas Tech, Kansas, TCU, Oklahoma State and Baylor took a hard right to the face on Thursday when the Pac-12 announced it will not expand.

If the Big 12 is going to remain in the current Power 5 model, it will have to do this on its own.

As much as people in the industry think the league should pitch Amazon or Hulu or another streaming service as its primary media rights holder, we are in an ESPN world until proven otherwise.

There is a reason why the NHL, after being dumped by ESPN in 2005, ran back to the network this year. If you are going to be a major sports league in the U.S., you need to be on the biggest major sports carrier.

As such, the Big 12 must find a way to add value or it’s dead and destined for an existence in the Group of Five.

The goal is to remain in the Power 5, and in the playoff, until that model formally dies. That death is inevitable and it’s also not today.

West Virginia President Gordon Gee is doing everything in his power to slow all of this down; he told The Daily Athenaeum that he thinks the expansion of the college football playoff is “on life support.”

“I am on the College Football Playoff Board of Directors [Managers] and I was a strong advocate for the 12-team playoff,” Gee told the Daily Athanaeum this week. “I am now no longer because I think with this changing environment, we want to keep it very narrow and keep it so there is a lot of opportunity to reconfigure what we’re doing in athletics.”

Translated, the Big 12 is not going to die just yet.

Until the funeral, the Big 12 needs to add BYU. And Boise State. And Central Florida. And Cincinnati.

There is no replacement for Texas or Oklahoma.

The “Moneyball” approach is the best method; come close in replacing the types of numbers Texas and Oklahoma will take to the SEC.

With millions of interested Mormons, BYU is Notre Dame lite.

Boise State has created a niche in college athletics located in an attractive town. The Broncos are a marketable brand, and opponent.

Central Florida has spent millions on its athletics facilities, and with more than 71,000 students is the largest school in Florida; its undergrad enrollment is a bit more than 61,000.

Cincinnati has successfully built its athletic department, and now features a football team that will contend for a playoff spot for the second consecutive year.

The Big 12’s prayer of being included by its brothers and sisters in the ACC, Big 10 or Pac-12 “alliance” against the SEC died this week.

There is nothing Big 12 commissioner Bob Bowlsby can do about it. He should have seen it coming, but even if he had there was likely little he could do to stop these departures.

It’s his job now to ensure the future of the league, and the only way he can do that is to add the best of the rest.

The geography of a league that stretches from Boise to Orlando makes no sense, but the map no longer factors into college athletics.

Adding Boise State, BYU, Cincinnati and Central Florida would make the Big 12 relevant, and give the league a chance for national relevancy.

It will give the Big 12 a chance to remain as a “power league” for as long as that moniker exists.

College football will eventually consolidate to one or two leagues that will be comprised of only the power brands; ESPN executives will map out that paradigm with the “cooperation” of league commissioners and nervous college presidents whose job security will depend on being a part of that new world.

We are not at that day yet, and until we are the Big 12 has no choice but to try to add.

Otherwise, it will become a hogwash league.