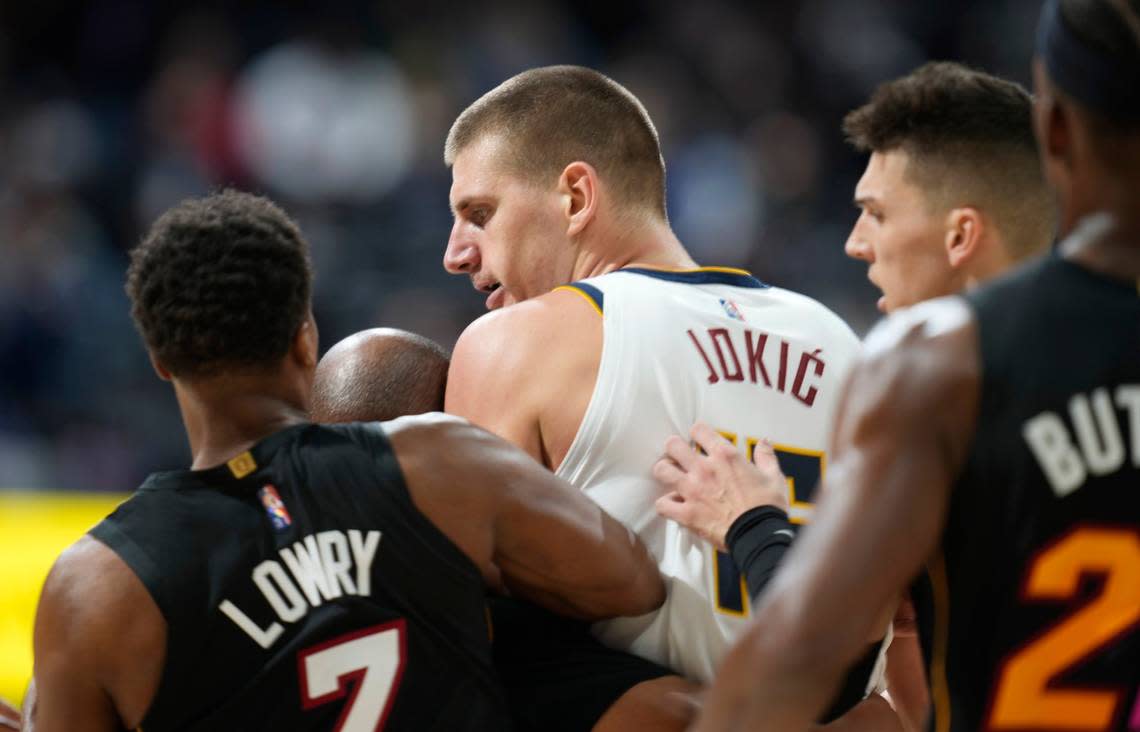 A six-pack of media notes on a Tuesday night:

▪ Through a Heat prism, it was natural to hold Denver Nuggets center Nikola Jokic almost singularly responsible for his cheap shot on Markieff Morris during Monday night’s game.

But TV pundits saw it differently on Tuesday, blaming Morris for instigating the altercation with a hard foul that Erik Spoelstra and the Heat didn’t see as particularly egregious.

When Ernie Johnson pointed out that Spoelstra called Jokic’s play dirty, Barkley said: “Erik Spoelstra is wrong. He’s just defending his guy. I’m watching all these fools on television all day talking about this. First of all, Morris started it. Joker retaliated.

“People say, ‘he hit me in the back.’ If you hit me, you better not turn your damn back because I’m coming back at you. You can’t hit somebody and turn your back. What about what Morris did was a basketball play? Zero. We all love Spo. He’s going to defend his guy. There was nothing basketball related what he did to Joker.”

TNT’s Shaquille O’Neal said Jokic and Morris each should be suspended for one game.

The message was similar on ESPN.

“That was a dirty shot [by Morris],” ESPN’s Kendrick Perkins said. “He instigated it. Jokic just happened to be 275 pounds so he was able to take it. He retaliated.”

ESPN’s Richard Jefferson said: “I agree, you should never hit someone in their back when they’re not looking…. At the same time, we’ve seen take-a-foul. The Miami Heat version of take-a-foul might be a forearm chuck. There was a little extra [by Morris], a little forearm shiver. Jokic went over the top. They took the L on the court, took the L in the fight…. Hopefully you will see them in the Finals.”

To recap, as detailed here by The Herald’s Anthony Chiang:

With 2:39 left in the fourth quarter of the Heat’s 113-96 loss to the Nuggets, reigning NBA MVP Jokic blindsided Morris in retaliation to a hard foul.

Jokic was dribbling the ball down the court and attempted to deliver a pass when Morris gave a hard foul with his left forearm in an effort to stop the play near midcourt. As Morris walked away after the foul, the 6-11 and 284-pound Jokic ran at Morris and shoved him from behind with his right shoulder and forearm. The shove sent Morris crashing to the floor as his head snapped back.

Morris, 32, remained on the court for several minutes while grabbing his neck. A stretcher was brought out, but Morris was able to slowly walk off the court on his own and the Heat announced shortly after that he suffered an “apparent neck injury.” Spoelstra called Jokic’s foul a “dirty” play.

Morris has been ruled out for Wednesday’s game at the Lakers because of whiplash.

WEDNESDAY NIGHT UPDATE: The NBA announced that Jokic has been suspended for one game without pay for shoving Morris. Morris was fined $50,000 for committing a Flagrant Foul 2 on Jokic that initiated an on-court altercation. Jimmy Butler fined $30,000 for attempting to escalate the altercation.

▪ Heat players haven’t been available to the media since the incident, but one of Morris’ teammates has commented publicly – in response to a sarcastic tweet by ESPN’s Jefferson.

Jefferson tweeted, in jest: “Prayers and speedy recovery to Markieff.”

Udonis Haslem, in response to Jefferson, tweeted: “Naw, I disagree. Jokic takes fouls on people like that all the time to stop the break. So [I don’t know] what the big deal was. Secondly I been in my share of brawls, dishing and taking. You don’t hit nobody in the back who is walking away after taking one. That’s bull—- and you better than that bra!!!”

▪ It must be tiresome for ESPN’s Steve Levy, Louis Riddick and Brian Griese to continue to be told (on social media) that they don’t measure up to the Manning brothers, who are providing a popular alternate Monday Night Football cablecast of 10 games.

The crew had some odd moments during Monday’s Bears-Steelers game, including Levy saying that Bears kicker Caro Santos’ unsuccessful 65-yard field goal attempt hit the crossbar, when it didn’t come close to hitting the crossbar.

And Griese suggested the Bears should go for two after Chicago tied the score late, even though an extra point would put them ahead. Griese then realized the stupidity of his statement and retracted it.

But the classy Levy told SI.com that they’re handling the Manning comparisons in stride.

“People want to pit us against each other and I don’t see that,” Levy said. “I’m looking at the health of the franchise that is Monday Night Football. The ratings are up. I don’t get into the numbers game, but more people are watching and if that’s because of Peyton and Eli, I’m all for that.”

ESPN’s traditional broadcast has been drawing four or five times as many viewers as the Manning telecasts, but the ratings for the Manning games keep rising.

▪ A lawsuit on this sort of thing was inevitable: When former NBA center DeMarcus Cousins asked longtime Sacramento Kings announcer Grant Napear in the summer of 2020 what he thought of the Black Lives Matter movement, Napear responded on Twitter: “All Lives Matter: Every Single One!”

Napier was fired later that week.

Now Napear is suing Bonneville Int’l Corp., the parent company of Sacramento-based KHTK-AM, “for an amount that exceeds $75,000 in damages for wrongful termination, discrimination and retaliation.”

He asserts he “suffered emotional distress, a loss of wages, humiliation and public shame” when he was fired by the company in June of 2020.

Napear, in the complaint, alleges he was terminated “because he is a Caucasian man who published a phrase on social media that [Bonneville International] contends violated the company’s ad hoc [but unpublished] policy supporting Black Lives Matter.”

▪ Former Marlins TV host/reporter Allison Williams left ESPN because she disagreed with the company’s vaccine requirements and instead joined The Daily Wire, a conservative outlet, where she will provide sports content.

As it turns out, Williams claiming she didn’t want the vaccine because she’s trying to have a child was only part of the story.

Medical experts have said there’s no evidence of the vaccine affecting fertility.

▪ Panthers ratings on Bally Sports Florida are up 21 percent through 10 games, a year after the Panthers finished with their best ratings in nearly two decades — something that’s quite an achievement in an era when viewers have more television and streaming options than ever before.

Also, Heat ratings on Bally Sports Sun are up 7 percent over a year ago, with each game being viewed by 2.3 percent of Miami-Dade/Broward homes on average.