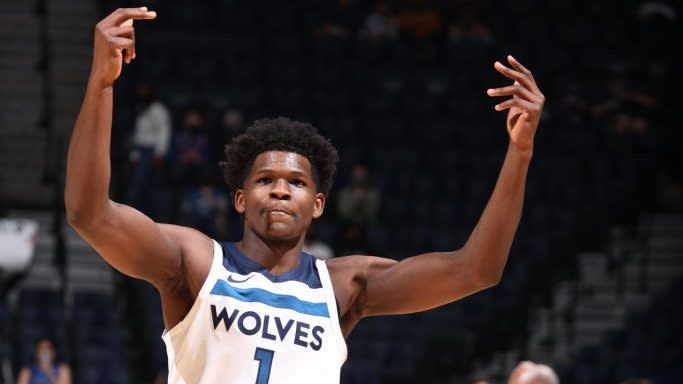 Anthony Edwards is officially listed at 6’4″ — at least for now.

Timberwolves coach Chris Finch said in an interview with Chris Hine of the Star Tribune that Edwards has grown a couple of inches in the last year since the draft and is now more like 6’6″.

He meant the 20-year-old guard has actually gotten taller from the time the Wolves drafted him in November, from around 6-4 to approximately 6-6.

“This is a very Ant thing,” Finch said at the Star Tribune booth at the Minnesota State Fair on Wednesday. “He told me, ‘Don’t let me get to 6-6 or I’ll be Michael Jordan.’”

Edwards has never lacked for confidence.

Finch added that the extra couple of inches has the coaching staff considering using Edwards as a small-ball four in some lineups. Finch also was honest in providing some insight into how to coach the young and rising star.

“He’s an extremely unique player and has all this raw ability, but he’s very literal when you coach him. Like I say to him, ‘I need you to go out and do X,’ he’ll do it,” Finch said. “We discovered in the last part of the season [when I’d tell him], ‘I need you to get seven rebounds tonight.’ We gave him goals almost every game or every period of time, so you give him stuff to focus on and he went out and did that.”

After a rough start to last season, Edwards finished averaging 19.3 points and 4.7 assists a game and was shooting the ball efficiently as well as setting up teammates. He finished second in Rookie of the Year voting and was First Team All-Rookie, and most importantly, by the end of the season looked like a franchise cornerstone player to go next to Karl-Anthony Towns.

How big a leap Edwards makes into next season is one of the keys in if the Timberwolves can outpace the betting odds of 34.5 wins next season and push into a fight for one of the play-in game spots in the West.

Check out more on the Timberwolves