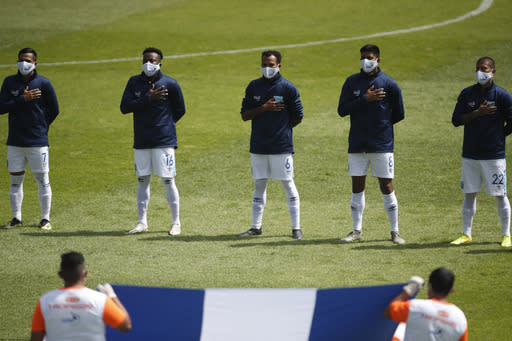 The Latest on the effects of the coronavirus outbreak on sports around the world:

The German hockey league will resume play next month for the first time since March.

The 2020-21 season will begin on Dec. 17 with the 14 clubs split into a pair of seven-team regional groups and playing fewer games than normal. The playoffs will be best-of-three games rather than best-of-seven.

The start of the new season was delayed twice as clubs faced an uncertain financial future while playing in empty arenas. The league says clubs have received assurances of financial help from German politicians.

The league suspended play last season on March 10 and no champion was named.

German soccer club Hoffenheim says it tried to move its match against Stuttgart from Saturday to Sunday because of coronavirus cases but its request was refused.

Seven Hoffenheim players have tested positive for the virus in the last two weeks. The club hoped that the delay would allow more players to end their quarantine periods or regain fitness in training.

Hoffenheim sports director Alexander Rosen says the league rejected the application and »we accept the decision but we regret it.»

Hoffenheim is in 13th place in the Bundesliga and Stuttgart is in eighth.