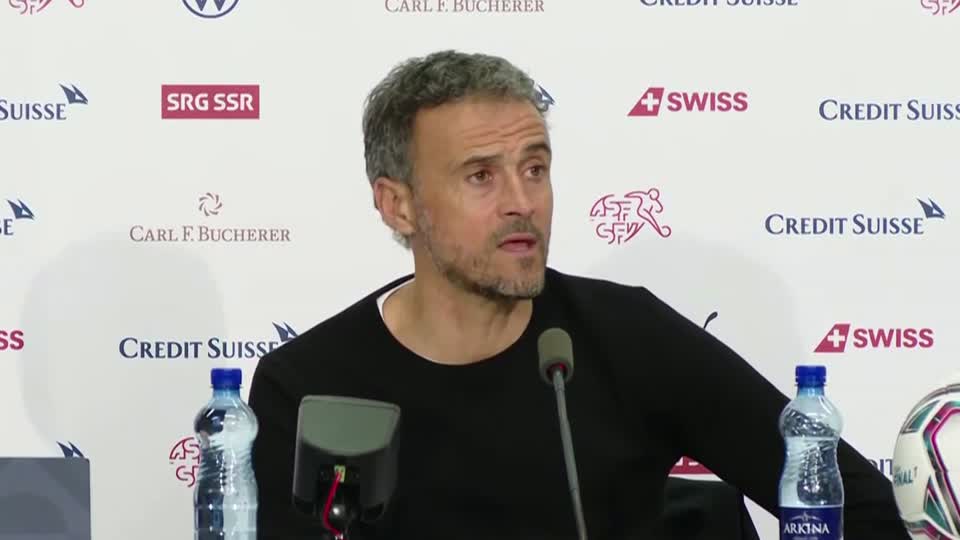 «No, I am not worried (about my team) at all. And of course, looking just at the results, there could have been better results. But I analyse it a bit deeper. I don’t just look at the results. I pay attention to what I see, what the squad does, that we create more chances than our opponents, usually – there will be the day when an opponent creates more than we do. So, as a professional, I try to pay attention to the things that could tip the scale to our favour. I say again, clearly, we have drawn matches, and at pretty much the last minute too, but I think we deserved to win this match. I don’t think there is any doubt about it. What I have to do is keep strengthening my team and my players to continue to buy into this plan, better it, make it stronger and correct the errors which we of course have made.»

3. STILL PHOTOGRAPH OF SPAIN COACH, LUIS ENRIQUE, DURING THE MATCH

«I think Sergio’s (Ramos) numbers when it comes to taking penalties are in the reach of few players. It wouldn’t be fair to judge him because he didn’t make one or two – what’s more, if there were another penalty, he would have taken it. Three. And if there was a fourth, even if he would have missed the third, he would have taken that one too. You can’t just get on the bandwagon when he makes 25 in a row and then criticize him if he misses two. It’s a joke. There’s a list of penalty takers that we put up with the players who will take them and first on the list is Sergio Ramos. He would have taken another penalty had there been one.»

10. STILL PHOTOGRAPH OF RAMOS AFTER MISSING A PENALTY

11. STILL PHOTOGRAPH OF RAMOS BEFORE THE START OF THE MATCH

STORY: Spain captain Sergio Ramos is used to grabbing headlines for the right and wrong reasons and did just that on Saturday (November 14) against Switzerland, becoming the most capped European player ever and then the first Spain player to miss two penalties in a game.

Ramos broke Italy great Gianluigi Buffon’s record by making his 177th appearance in the Nations League match, which ended 1-1, adding to an incredible collection of feats in a career in which he has won every major trophy for club and country.

The defender truly made his mark on the occasion, ending a remarkable run of scoring 25 consecutive penalties by missing two in the second half whilst producing a goalline clearance to prevent Switzerland forward Haris Seferovic making it 2-0.

Ramos could also have scored in open play late in the game only to miss the target, but Gerard Moreno did find an equaliser to avert what would have been a second consecutive Nations League defeat for Spain after last month’s 1-0 loss to Ukraine.

The number one spot-kick taker for Real Madrid and Spain, despite being a defender, Ramos has turned penalty taking into an art in the last two years, with his last miss coming when he hit the crossbar in Madrid’s 3-2 defeat by Sevilla in May 2018.

He has confessed to relishing the high-stakes situation of a penalty, scoring a number of crucial spot-kicks in Real’s run to the La Liga title last season as well as netting from the spot in last month’s 3-1 win at Barcelona.

But he finally met his match in Swiss keeper Yann Sommer, who guessed the right way to parry Ramos’ first penalty early in the second half and then refused to be fooled by the Spaniard’s ‘Panenka’ routine which has worked so well for him in the past.