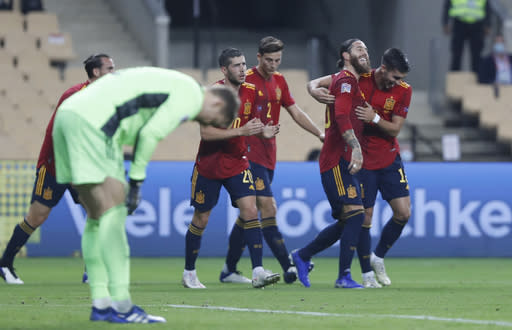 MADRID (AP) — The criticism was getting worse as the disappointing results were piling up, and the pressure was building on coach Luis Enrique.

Spain put all that to rest on Tuesday after routing four-time World Cup champion Germany 6-0.

»Maybe this result will help give fans hope again and convince those who doubted us,» Luis Enrique said. »It was important to get back to winning with a great performance like this.»

Ahead of the match, Luis Enrique’s choices were being questioned and some of his decisions were being condemned.

Players were being targeted as well. Concerns were being raised about their inexperience as hopes of seeing the team advance in the Nations League were fading quickly. And expectations of success in next year’s European Championship were also taking a hit.

All those doubts and criticisms quickly went away thanks to the historic win in Seville. The commanding victory qualified Spain for the Final Four of the Nations League for the first time, and quieted most of the critics back home.

Spain was coming off three consecutive setbacks. It lost to Ukraine and drew with Switzerland in the Nations League, and it drew with the Netherlands in a friendly.

The draw against Switzerland left La Roja in need of a victory against group leader Germany to avoid another elimination in the Nations League. Few believed Spain would have much of a chance considering its disappointing performances in recent matches, but it didn’t take long for that to change.

The Spanish team dominated from the start at La Cartuja Stadium, scoring three goals in the first half and three more in the second to hand the Germans their worst loss in a competitive match. Germany’s only five-goal setback in a competitive game had been West Germany’s 8-3 loss to Hungary in the group stage of the 1954 World Cup.

Luis Enrique had been saying all along that he had confidence in the squad and was noticing some positive aspects despite the lack of good results. It finally all came together in a match.

»The players know of their potential, but this will help reassure them,» Luis Enrique said. »It will help keep them motivated.»

He further praised his team by talking up Germany’s squad.

»Germany remains one of the best teams in Europe and in the world,» he said. »It arrived here unbeaten and it played with its best players.

»To put this type of pressure on a team like Germany, you need great collective work by everyone, in attack and defense.»

Luis Enrique said the victory should keep the players’ confidence high going into the European Championship. He said he made the players face the game as if it was part of next year’s competition.

»We prepared for the game as if it was a quarterfinal,» Luis Enrique said. »We wanted it to look like an elimination game at the Euros, and the players and the team were outstanding.»

Luis Enrique’s only disappointment was that fans didn’t get to see the historic victory in person because of the coronavirus pandemic.

»It’s just a shame,» he said, »that our fans couldn’t enjoy a match like this from the stands.»