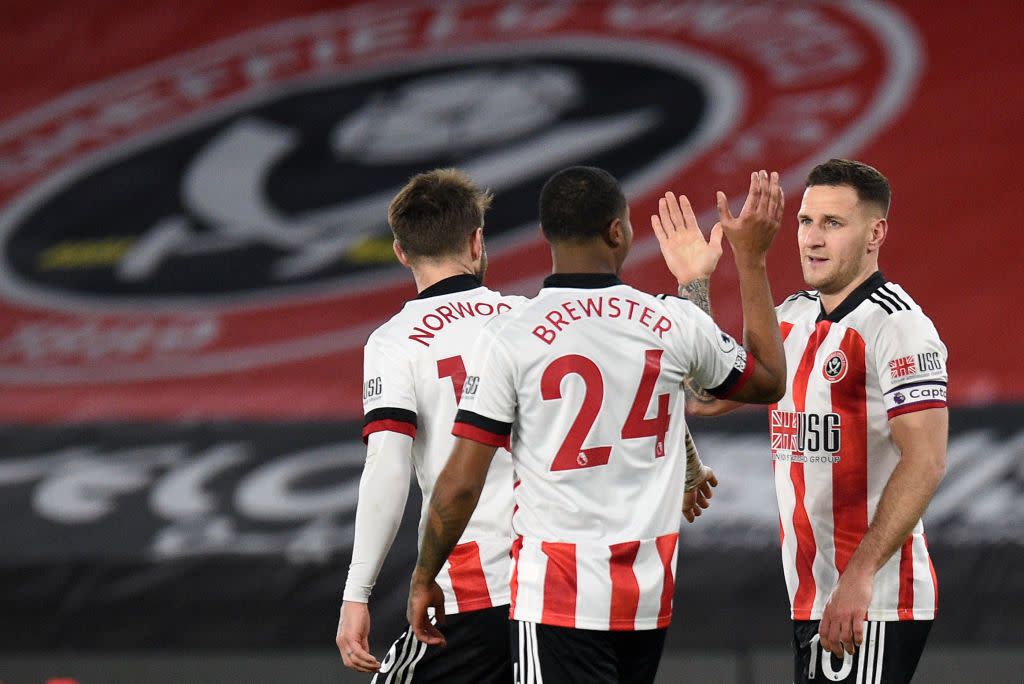 Sheffield United – Newcastle was dominated by the home side from the start, and at the 18th attempt the Blades finally secured their first Premier League win of the season.

It is also their first win since July when they beat Chelsea. Relief was etched across the face of everyone connected with the Blades, as new life was breathed into their battle against relegation.

Billy Sharp’s late penalty kick won it for Sheffield United, as Steve Bruce’s Newcastle were woeful throughout and were reduced to 10 men right on half time.

The win moves Chris Wilder’s Sheffield United onto five points for the season, as they are still nine points from safety but have given themselves hope of launching an unlikely survival bid.

1. Razor sharp Blades give themselves hope: Let’s get it straight, Sheffield United don’t deserve to be bottom of the table. They have played well in a lot of games this season but have just come up short in key moments. They got the rub of the green against Newcastle and made it count. They earned that luck as they were brave on the ball, made positive runs forward and started the game brightly. Wilder’s boys were snapping into tackles and looked like they are starting to believe they can drag themselves off the bottom of the table. That belief is huge to turning this around.

2. Newcastle their own worst enemies: This negative performance was woeful from Newcastle, and they were their own worst enemies. A red card from Ryan Fraser after two quick-fire silly yellow cards compounded their awful display and Federico Fernandez’s handball summed up a rotten evening. Newcastle’s fans will be calling for Steve Bruce to be fired after this, as they sit eight points above the drop zone but have now failed to win any of their last six games. Pressure is building on Bruce and this Newcastle squad has too much quality to be this far down the table.

3. Sharp must start: Okay, so he should have been sent off late on for an awful tackle on Fabian Schar, but Sharp scored the spot kick, got in a position to win it and was sniffing around the six-yard box. He was only on the pitch for the final 30 minutes. Sharp, 34, must start because Sheffield United whip in balls from out wide and create lots of chances for him to finish off. None of their other forwards possess his ability in and around the box. If they’re going to save themselves from relegation, they have to score more goals. Sharp must start.

Man of the Match: Jayden Bogle – Brilliant display down the right flank from the youngster, as he went close to scoring on several occasions and dug deep defensively.

The Blades started well and Karl Darlow denied David McGoldrick, who was played in behind after some great interplay but his curled effort was saved.

Newcastle rarely threatened in the first half, as Sheffield United had the majority of the ball. Callum Wilson headed wide from a great position as the Magpies’ forward saw a great chance come and go, while at the other end McGoldrick nodded over.

Federico Fernandez made a superb last-ditch tackle and Darlow made a flying save to deny Jayden Bogle as Sheffield United pushed hard to go ahead.

Right on half time Newcastle were reduced to 10 men, as Fraser received two quick yellow cards and was sent off.

At the start of the second half Bogle went close after another flowing move from the Blades, as Darlow denied him.

With 20 minutes to go, Sheffield United were given a penalty kick as Fernandez handled the ball as substitute Billy Sharp tried to wriggle away from him in the box.

Sharp slotted home the spot kick to seal all three points for the Blades, as he celebrated in emotional fashion as the boyhood fan scored his 100th league goal for Sheffield United.

Late on Brewster twice went close as he hit the post, as Sheffield United got the win their performance deserved.