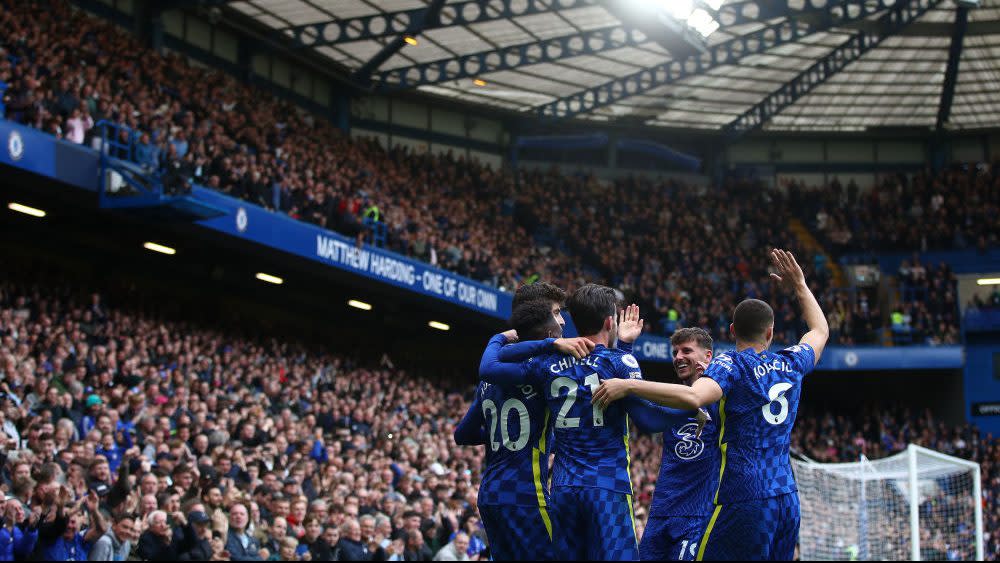 First-place Chelsea and last-place Norwich City followed the script Saturday as the striker-hampered Blues demolished the Canaries 7-0 at Stamford Bridge.

It wasn’t close, 5-0 by the time Norwich’s Ben Gibson was sent off in London, as Chelsea moves four points clear of their title rivals before the next six teams on the table play each other later this weekend.

Mason Mount scored a hat trick and had an assist, Mateo Kovacic had two assists, and Callum Hudson-Odoi, Reece James, and Ben Chilwell scored to join a Canaries own goal on the score sheet.

Winless Norwich hasn’t scored in four games and has lost seven of nine contests to start the Premier League season.

Three things we learned from Chelsea vs Norwich City

1. Chelsea’s depth flex: It might be glib and overdone to write something like, “No Lukaku, no Werner, no Pulisic, no problem for Chelsea,” but it sure looked that way against Norwich City. Hudson-Odoi scored and forced an own goal and then joined Kai Havertz and Jorginho in getting the final half-hour off to prepare for their newly-congested personal schedules. This turned out to be a training exercise, nothing more. The last 20 minutes appeared to be little more than Hakim Ziyech trying out ridiculous and near-successful passes and shots.

2. No way out for Norwich after just nine matches? There was rarely — maybe never — anything to suggest that Norwich City was going to find anything but pain at Stamford Bridge, and Daniel Farke’s men were overrun and comically inferior to Thomas Tuchel. Ben Gibson’s 65th-minute red card may allow Norwich to attach “10-men” to the headlines, but it was 5-0 at that point. The ship was already underwater. Rose let go.

3. Kovacic is under the radar of whatever else is under the radar: Mateo Kovacic was absolutely everywhere on Saturday, and it reminds us that great teams like Chelsea often disguise some tremendous performers by virtue of how many ingredients create the fine meals. Kovacic is in a team with N’Golo Kante and Jorginho, one who should’ve won a Ballon d’Or and the other who may well win this year. Put some respect on his name, as the kids say.

Man of the Match: Mateo Kovacic

We know Mount scored three and that he was doing the business in the absence of Werner, Pulisic, and Lukaku. And we know there could be ironic and non-ironic shouts for Norwich’s Tim Krul, who made eight saves and stopped a penalty (even if it was retaken due to leaving his line early).

But Kovacic edges Mount, whose second goal was his second bite at the late penalty. He missed on just four of 86 passes, collecting two assists and helping to draw that penalty with his ball to Antonio Rudiger. Five key passes and four tackles complete his day.

Canada ready for World Cup ‘battle’ with US