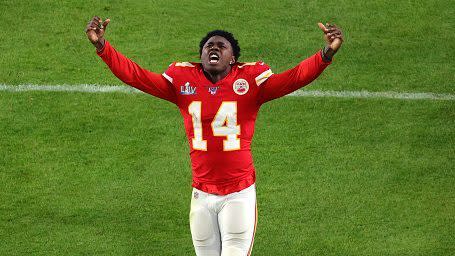 Chiefs wide receiver Sammy Watkins trimmed $4.75 million from his 2020 base salary when he agreed to rework his deal earlier this offseason and his reason for doing so wasn’t much different than the reason Patrick Mahomes gave for signing his own extension this week.

Mahomes said that his deal, which some thought should have been bigger, gives him security while allowing him to play on a team that can challenge for championships by holding onto more of his supporting cast. During an appearance on SiriusXM NFL Radio, Watkins said his agent was shooting for “big numbers” when the offseason got underway but he ultimately decided he prioritized other things.

“How much money do I need? My family’s taken care of well,” Watkins said. “Do I want I go to a team and lose and get 1,000 yards with a team that’s sorry. Or do I want to come back with one of the best coaches, the best quarterbacks, the best organization, the best team, the best wideout group — arguably — and come try to fight for another championship.”

Watkins’ revised deal includes incentives that could make up for the money he gave up by redoing his deal in Kansas City, but it seems that’s a secondary consideration for Kansas City’s leading receiver during their postseason march to the Super Bowl.

Sammy Watkins on pay cut: How much money do I need? originally appeared on Pro Football Talk