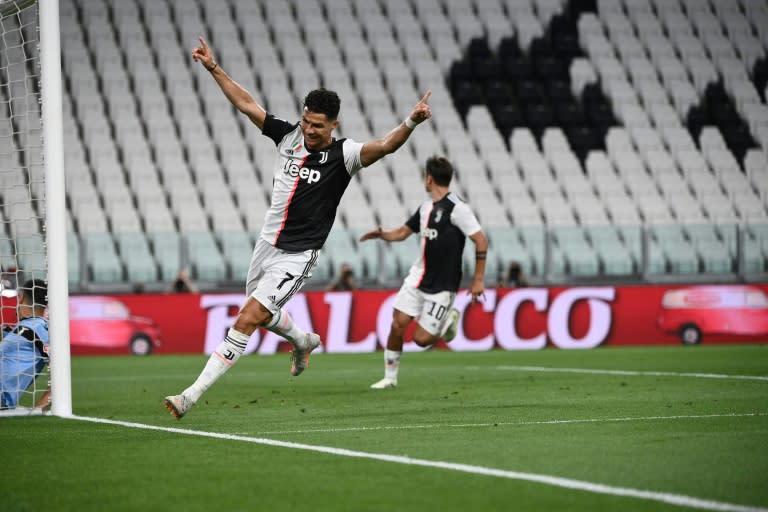 Turin (Italy) (AFP) – Cristiano Ronaldo put Juventus on the brink of a ninth consecutive Serie A title on Monday after scoring twice in a 2-1 win over Lazio.

The reigning champions ended a three-match winless run thanks to Ronaldo’s second half brace that moves them eight points clear of second-placed Inter Milan with four games remaining.

Maurizio Sarri’s side could win the title on Thursday against lowly Udinese, or on Sunday at home against Sampdoria, depending on their rivals’ results this week.

Lazio’s hopes of a first Serie A title since 2000 are effectively over as the defeat leaves them fourth, 11 points adrift of the leaders.

Ronaldo grabbed the first goal from the penalty spot just after the break and was handed a tap-in three minutes later by teammate Paulo Dybala.

The Portuguese has scored 30 goals this season, equal with Lazio’s Ciro Immobile, who ended his three-match drought with a late penalty. His second was his 50th goal in Serie A.

The 35-year-old Portuguese is looking to become the first player to finish top scorer in three of the top five European leagues after doing so England and Spain.

«Records are always important, but the team victory is more important,» Ronaldo said to Sky Sport.

«I’m helping the team to win. It’s important to win the title. There are four games left and we know that Serie A is a difficult championship.»

Just one point had separated Juventus from Lazio when Serie A returned last month following the three-month coronavirus lockdown.

But Simone Inzaghi’s side have been hit by injuries and poor form since the return, losing five of eight games, with four of those defeats coming in the last five matches.

Both sides had early chances with Felipe Caicedo coming close early for the visitors behind closed doors at the Allianz Stadium, and an Alex Sandro header clipping the woodwork.

Lazio goalkeeper Thomas Strakosha got his hand to push an angled Adrien Rabiot over the bar with Ronaldo heading wide.

An Immobile rocket from the edge of the box hit the bottom of the post with goalkeeper Wojciech Szczesny beaten.

Lazio could thank defender Manuel Lazzari for a goal-line clearance just after the break as Dybala threatened and Ronaldo tried to finish amid chaos in front of goal.

But the hosts got their chance when a Bastos handball was confirmed after a VAR review.

Ronaldo stepped up to slot in on 51 minutes and added a second after a Luiz Felipe blunder allowed Dybala to gain possession with the Argentine powering up the pitch, before teeing up the Portuguese to finish off.

The five-time Ballon d’Or winner missed the chance of a hat-trick when his header hit the crossbar after 66 minutes.

Lazio pulled a goal back with seven minutes to go after a Bonucci foul on Immobile, who converted the resulting spot-kick.

«There is a bit of regret because after the lockdown we had a lot of problems,» said Inzaghi, whose side had beaten Juventus twice this season, in the reverse league fixture in Rome and the Italian Super Cup final.

«At the end of the game I congratulated the lads because despite the problems we showed character.

«The important thing is we want to celebrate a return to the Champions League after 13 years.»

Lazio are in the final Champions League berth 11 points ahead of city rivals Roma.

Juventus next travel to Udinese a day after Inter host Fiorentina.

Atalanta, a further point back in third, can move second on Tuesday when they host Bologna, with a win putting the Bergamo side six points behind Juventus.