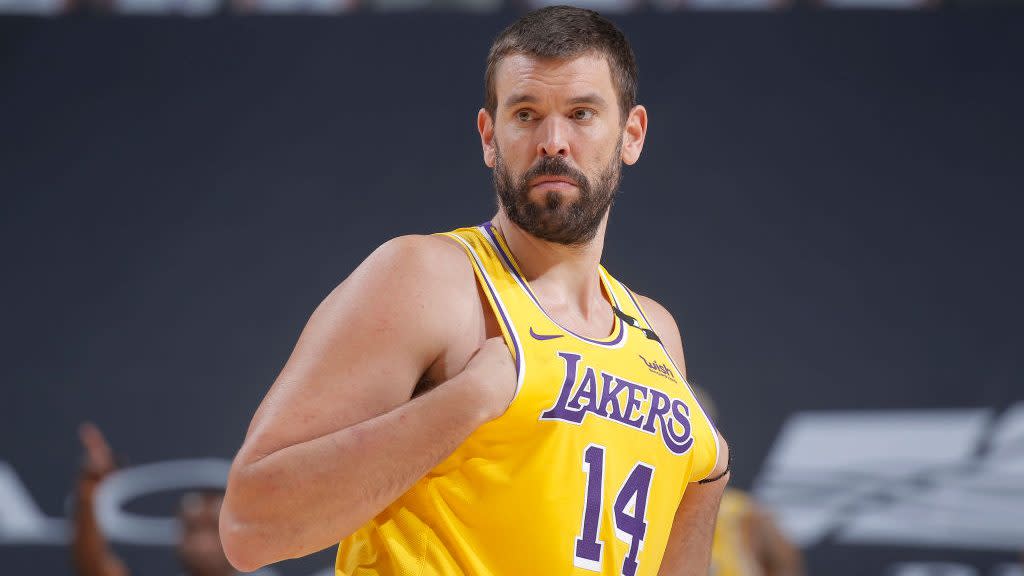 Marc Gasol has a fully guaranteed $2.7 million contract with the Lakers this season. Even after 13 NBA seasons and more than $185 million in career earnings, that’s a lot of money to walk away from.

But he may walk. That according to Marc Stein in his must-subscribe newsletter.

I’m hearing that Marc Gasol is not a lock to return to the Lakers, even after Gasol said following Spain’s quarterfinal loss to the United States in the Olympics that he intends to play out the final year of the two-year deal he signed with Los Angeles. It’s not yet clear if that means Gasol is poised to be set free to play elsewhere in the NBA or if he would ultimately opt to finish his career in his home country like brother Pau.

Gasol is set to be part of a three-man center rotation with Dwight Howard and Anthony Davis. (While Davis prefers not to play much center during the regular season, he may have to this campaign to provide better spacing around Russell Westbrook.)

Gasol started at center much of last season and developed a good passing chemistry with LeBron James until Andre Drummond was signed as a free agent by the Lakers (after the Cavaliers waived Drummond). As part of a promise to get him to sign with Los Angeles, Drummond started the rest of the season at center and into the playoffs, at least until Game 6 against the Suns in the playoffs, when coach Frank Vogel returned to Gasol for floor spacing and defensive reasons. It was too little, too late.

Gasol said he planned to return to the Lakers after the Tokyo Games. That has to be the default expectation until Gasol says otherwise, but playing for Spain in Tokyo may have changed his perspective. If Gasol leaves, the Lakers would be on the market for another veteran minimum big man to fill a role.

Los Angeles currently has three open roster spots, and while the headlines went to an Isaiah Thomas workout, Stein says the frontrunners for two of those spots are forward JaKarr Sampson and guard Tim Frazier. With all due respect to Thomas, Frazier makes a lot more sense as the third point guard, he has been on the fringes of the NBA playing in Memphis and Detroit the past couple of seasons, and he brings real playmaking skills.

Sampson played the last two seasons in Indiana; he is very athletic and provides bigs dunks and blocks, but is an end of the rotation guy (he battled injuries last season). He tends to get in foul trouble, but in short flashes he can fill a role.

Not picked as NBA’s best player, LeBron James pokes at himself as ‘#SUPERWASHED’ NBA 2K22 ratings are rolling out. Durant, Young among players not happy. Report: Lakers work out Isaiah Thomas, others in search for more depth

Report: Marc Gasol “not a lock” to return to Lakers this season originally appeared on NBCSports.com