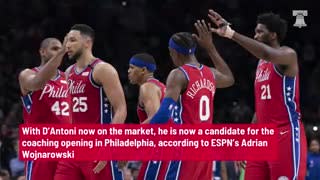 The list of worthy candidates for the current coaching vacancy for the 76ers continues to grow. Mike D’Antoni’s contract has ended with the Rockets after four seasons and he is leaving the team to become a coaching free agent. He led Houston a 217-101 record during his time there and the team reached the Western Conference Finals in 2018 coming up one win short of the NBA Finals. With D’Antoni now on the market, he is now a candidate for the coaching opening in Philadelphia, according to ESPN’s Adrian Wojnarowski