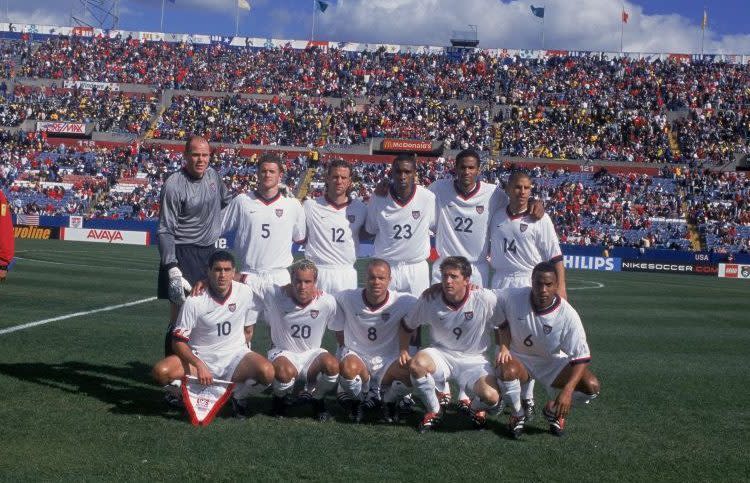 As we mark the 20th anniversary of 9/11, we remember how the USMNT played a role in giving American sports fans a national team to support in the immediate aftermath of the attacks.

The USMNT played in their first game post 9/11 on Oct. 7, as they were the first national sports team to represent the U.S. following the terrorist attacks.

On a picturesque fall day in Foxboro, Massachusetts there was a strong sense of pride, patriotism and resilience on and off the pitch as the USMNT hosted Jamaica in a key World Cup qualifier.

The stakes were high as a defeat would have seen the U.S. eliminated from World Cup qualifying, but the U.S. beat Jamaica 2-1 and other results went their way to seal qualification to the 2002 World Cup, as Joe Max-Moore scored twice to send the USMNT through on an emotional day.

And on that same day, the national TV broadcast of that USA v Jamaica game was cut as ABC had live coverage of the invasion of Afghanistan, which also began on Oct. 7.

USMNT legend Claudio Reyna, who was captain that day, explained that emotions were running high as players, staff and fans were fully aware of what being the first team to represent the USA post-9/11 meant.

“It was a special day, a very emotional day to wear an American jersey,” Reyna said, via U.S. Soccer. “It was the first time a U.S. team represented the country post 9/11. There was anger on the team, too. We just carried all the feelings everybody had throughout the country.”

An emotional day ended in a crazy swing of other results in the USMNT’s favor, as multiple upsets and results went their way, as coupled with their win they could celebrate reaching the 2002 World Cup.

“It was party time,” Reyna said. “It was a fine night out in Boston for the boys… Going to another World Cup was amazing. All the qualifications I’ve been through, it’s a challenge and it’s very rewarding to quality for World Cups because you just never know. My whole life, if I could get to play in one, it would be incredible. So, every opportunity you get you’re just so thankful.”

The whole day the mind of Reyna, and everyone connected with the USMNT, was on one thing: giving Americans a team they could be proud of.

“What happened that day was special because we could take people’s mind off what happened, represent the country well and in a way a big success for the country was needed. Sports brought everybody back after 9/11. We felt we played our part as well,” Reyna said.