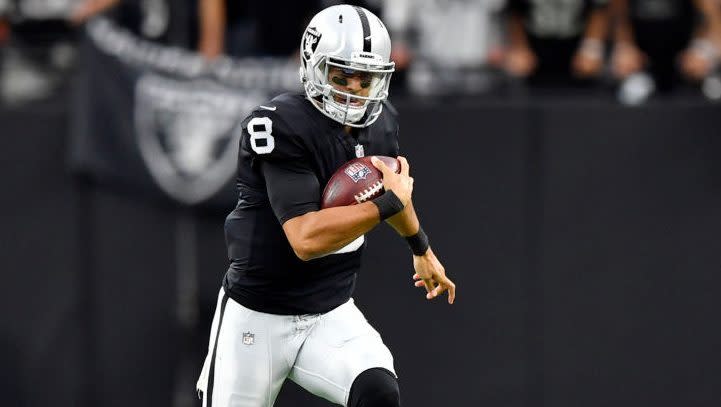 The Raiders won their first game of the season in thrilling fashion, but it may have been costly.

Ngakoue, Las Vegas’ most significant free-agent signing in the offseason, injured his hamstring during Monday’s game. McCoy had to be carted off the field with a knee injury.

“Hopefully Yannick is not as seriously injured as he possibly can be — we don’t know the outcome yet,” Gruden told reporters. “Losing McCoy is a big loss to our leadership network and our D-line.”

Mariota took a designed quarterback run 31 yards on third-and-1 early in the game, but was unable to play for the rest of the contest. While Mariota is Las Vegas’ backup quarterback, Gruden apparently had significant plans for the 2015 No. 2 overall pick.

“Yeah, we lost a big part of our offense,” Gruden said. “Hopefully it’s not going to linger on. He missed the whole preseason with a quad strain. He strained it again last night. The severity of that injury kept him out of the game. it’s too bad — it was a 31-yard gain to really give us an element we haven’t really had around here.”

The Raiders travel to face the Steelers on Sunday, playing in the early window on a short week.