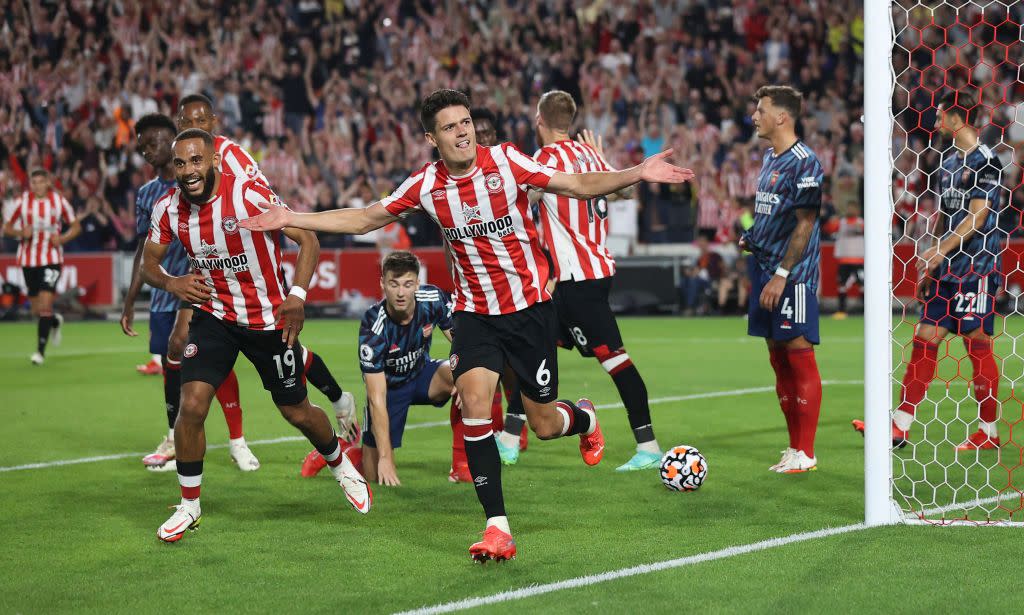 LONDON — This is the stuff dreams are made of, as Brentford beat Arsenal 2-0 to celebrate their first-ever Premier League game with a famous win on the opening day of the 2021-22 season.

The Bees, playing in their first top-flight game since 1947, were buzzing from start to finish and totally unsettled Premier League giants Arsenal, who never truly got going.

Sergi Canos slammed home in the first half and Christian Norgaard headed home in the second as an understrength Gunners could not cope with the tempo of the Premier League new boys and Mikel Arteta looked dejected on the sidelines.

Brentford will spend their first day as a Premier League club atop the table. How about that for a start to the new season?

3 things we learned from Brentford – Arsenal

1. Historic moment enjoyed universally: How can you not love Brentford? In their first top-flight game since 1947, the Bees were rampant and their fans roared them on to victory as the first-ever full capacity crowd at their new stadium was treated to an historic occasion. Canos’ fine strike to put them ahead sent the Brentford fans wild. Norgaard’s goal was celebrated wildly too. From their Moneyball approach to scouting players, strong community ties and just being very different to most clubs, they will be everyone’s favorite second team this season.

Brentford are an extremely fun addition to the Premier League and their new stadium, nestled in-between roaring motorways in west London, is a little gem. The atmosphere was electric and intimidating for opposition players, with the Bees faithful so close to the pitch. 16,479 fans sounded like 167,490. Maybe that was just because this was their first PL game or the first PL game in front of a full stadium for 18 months. Whatever the reason, it was an incredible, historic moment. What a win. What a story.

2. Sluggish Arsenal in trouble: Yes, they were missing the injured Partey and Gabriel, plus Aubameyang and Lacazette through illness and Saka could only come off the bench, but this was so lackluster from Arsenal. Arteta was not a happy man on the sidelines as his team could not match Brentford’s intensity. In the second half they improved as Smith Rowe was dangerous, Martinelli never stopped running up top and Saka made a big difference after coming on. Albert Sambi Lokonga was very steady too on his Premier League debut, but it’s clear that Arsenal’s policy of promoting young players will have plenty of growing pains. Will Arsenal keep the faith with Arteta’s long-term plan? Results, and displays, like this will not help his cause.

3. Brentford’s front two will cause problems: In the first half in particular the front two of Ivan Toney and Bryan Mbuemo caused Arsenal so many problems with their high press. Mbuemo dragged a great chance wide, hit the post and Toney whipped in some great balls and his movement was sensational. Those two will cause lots of Premier League teams problems and with Canos and Rico charging forward out wide, Brentford are a real handful. Their high-press unsettled Arsenal and although they did leave a few gaps on the counter, they were fairly well-organized too. Watch the Bees this season. It will be fun.

Man of the Match: Sergi Canos – Smashed home a beauty to make it 1-0 and never stopped running down the right flank. What a display.

Arsenal had plenty of the ball early on as Brentford worked hard and shut down the spaces, with Smith Rowe, Martinelli and Balogun struggling to find space.

Brentford had a few good chances as they grew into the game and pressed high against Arsenal. One looping effort fell onto the top of the net, then Bryan Mbeumo broke free but his shot hit the outside of the post and went wide.

The hosts then took a deserved lead as a cross into the box caused problems and Sergi Canos picked up the loose ball and slammed home a low shot at the near post to catch out Bernd Leno and send the home fans wild.

Brentford were rampant after that opener as Mbuemo wriggled free brilliantly but dragged his shot wide when clean through.

At the other end Folarin Balogun turned and tried to get a shot away but went down as Arsenal continued to struggle to match Brentford’s intensity as Nicolas Pepe curled a shot wide from distance.

In the second half Arsenal finally got their act together as Smith Rowe raced free after a lovely turn but his shot was straight at David Raya.

Smith Rowe was the Arsenal player who tried to drag them back into the game as Bukayo Saka made a big difference after he came off the bench too. Tierney’s shot was deflected wide and Martinelli almost flicked a header home as Arsenal improved.

At the other end Mbuemo hit a low shot which Bernd Leno saved as Arsenal took risks late on and poured forward. Granit Xhaka slammed a shot over and then Brentford doubled their lead.

A throw in from the left was flicked on and Norgaard powered home a header from close range to send the Brentford Community Stadium bonkers.

Late on Raya denied Nicolas Pepe with a great stop as Arsenal threw everything at Brentford, but the Bees stood tall on a famous night for the Premier League newcomers.