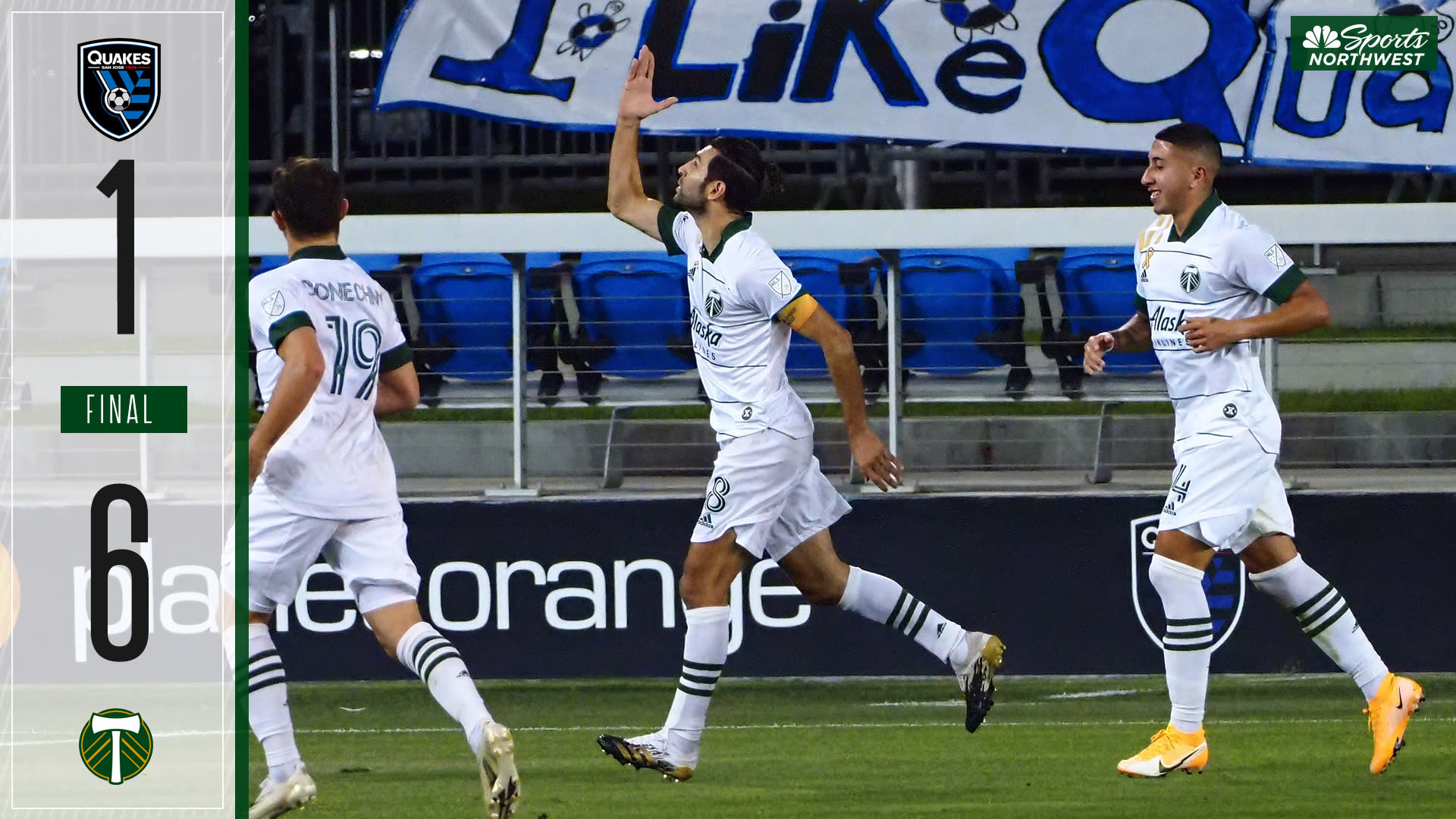 Diego Valeri’s the best player in Portland Timbers history and he played like it on Saturday.

After being rested in Portland’s draw against San Jose Wednesday, his fresh legs were the difference between a draw and a victory Saturday evening.

El Maestro scored a brace, Jeremy Ebobisse and Julio Cascante each headed in a goal, Yimmi Chará got a rebound and Jaroslaw Niezgoda converted a cross to give the Timbers a 6-1 victory over the Earthquakes,  earning three points for the first time in three matches, and second overall victory since the MLS regular season restarted in August.

Valeri’s first goal occurred in the 25th minute after Shea Salinas was called for a handball inside the box, awarding the Timbers a penalty kick.

Then, before you knew it Jorge Villafaña’s beautiful cross found Ebobisse far-post who headed it beyond the keeper to earn a two-goal advantage. In the process, Ebobisse scored his eighth header in his career, breaking the Timbers MLS record previously held by Valeri.

The Timbers would concede a goal in the 44th minute from Carlos Fierro, but Portland still entered the locker room with a 2-1 lead.

That would not be enough for the Timbers.

In the 57th minute, Valeri would show that he’s a master at not just soccer, but at pinball when he earned his brace for the contest.

They wouldn’t be done yet. Ebobisse tried to blast a shot that would be saved by San Jose, but Yimmi Chará got the rebound and the easy tap-in to give Portland a three-goal advantage. This was Chará’s second consecutive game with a goal, both coincidentally against the Earthquakes.

Then, for good measure, Valeri recorded an assist in the 85th minute to Julio Cascante who scored his first career goal in three seasons as a Timber.

However, the Timbers played to the final whistle and Andy Polo passed the ball to Niezgoda who converted the ball for a sixth goal of the evening for Portland.

Not to be outdone by his team’s offensive attack, goalkeeper Aljaz Ivacic made his first career start for the Timbers since being acquired in January 2019. The 26-year old was the first Timbers player ever from Slovenia, making the country the 51st nation that the Timbers have had a player from, per Mike Donavon.

Aljaz Ivacic makes his MLS debut tonight. Ivacic is the first Timbers player ever from Slovenia, making the country the 51st nation that the Timbers have had a player from. #RCTID https://t.co/SxdNVRYT5U

Ivacic showed he could play making not one, not two but three saves in the 42nd minute to keep the ball out of the net.

With the victory, the Timers earned their 18th point jumping from 8th to a tie with Minnesota United FC for 4th place in the Western Conference.

Next, Portland will host heated rival Seattle at Providence Park on Wednesday, September 23rd at 7:00 p.m. PT on Fox 12 PLUS.