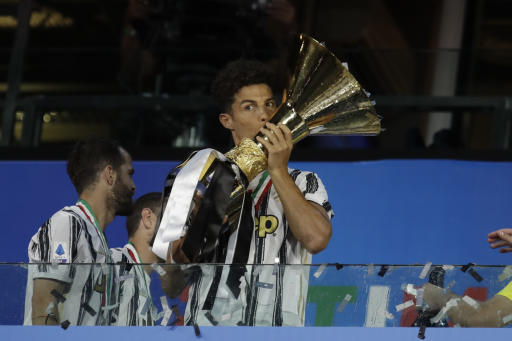 ROME (AP) — Helped by a rule change that led to more penalty kicks, Ciro Immobile matched the record for goals in a Serie A season with 36.

In his last match of the season, Immobile finished off an exchange with Adam Marusic with one touch midway through the first half of a 3-1 loss at Napoli on Saturday.

Current Juventus striker Gonzalo Higuain also scored 36 in 2015-16 while with Napoli, improving by one goal on the previous mark set by Gunnar Nordhal 66 years earlier.

However, while Higuain scored only three of his goals in 2015-16 with penalties, Immobile had 14 penalties this season – around 40 percent of his total goals.

Cristiano Ronaldo, who finished second on this season’s scoring list with 31 to match Juventus’ club record, had 12 penalties.

The plethora of penalties was a product of a rule calling for involuntary handballs to be whistled as fouls.

The rule is expected to be revised for next season.

The loss saw Lazio finish in fourth place – having trailed leader Juventus by just one point entering the break for the coronavirus pandemic.

Inter Milan sealed second place with a 2-0 win over high-scoring Atalanta, which hadn’t been held to a clean sheet since November.

Danilo D’Ambrosio scored with a header and Ashley Young found the target from outside the area in the opening 20 minutes.

Cristiano Ronaldo and Juventus strike partner Paulo Dybala were rested in a 3-1 home loss to Roma.

After Higuain’s opener, Roma struck back with a goal from Nikola Kalinic and two from Diego Perotti.

Still, it was a celebratory night for Juventus, which received the Serie A trophy after the game inside the empty Allianz Stadium.

Despite playing only half the season, Zlatan Ibrahimovic became the oldest player to score 10 or more goals in a single Serie A season.

At age 38, Ibrahimovic played a role in all three of AC Milan’s goals in a 3-0 win over Cagliari, including a powerful shot of his own that made it 2-0.

Ibrahimovic also used his strength to hold off a defender and enable Rafael Leao to shoot from a sharp angle. The ball bounced off the post and rebounded off Ragnar Klavan for an own-goal.

Andrew Dampf is at https://twitter.com/AndrewDampf