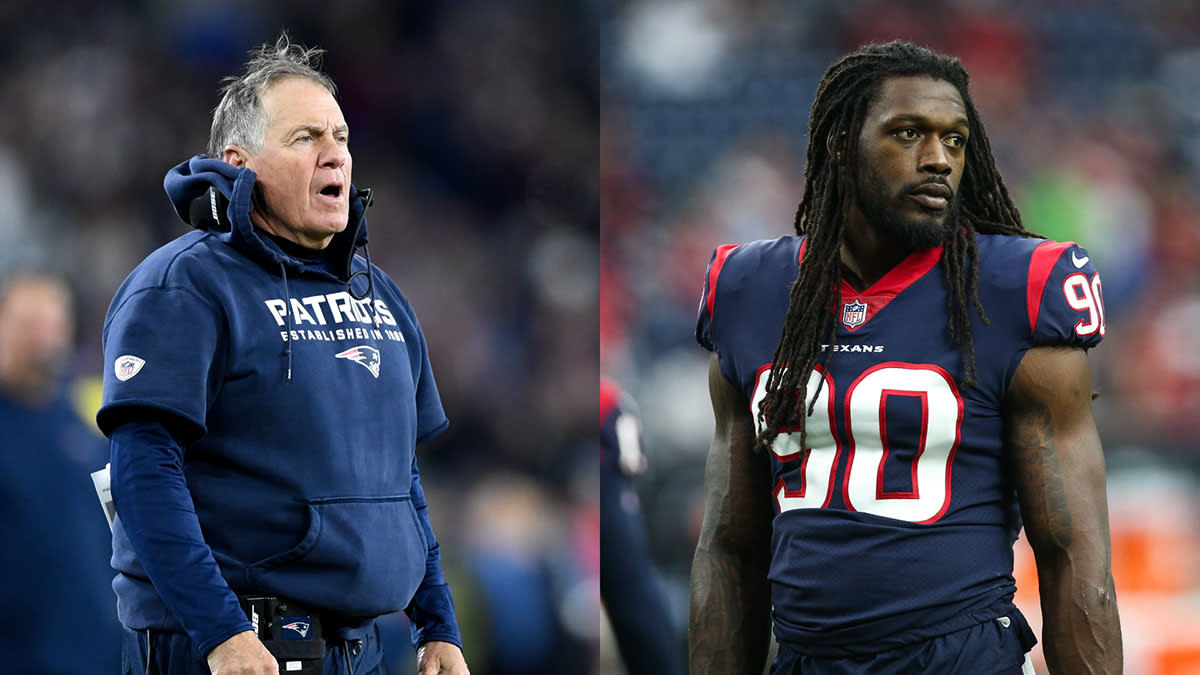 In less than 24 hours, it was discovered that the Patriots had six players from their 80-man roster opt out for the 2020 season due to COVID-19 concerns.

From a health and wellness perspective, no one can blame them. From a football perspective, the Patriots will be hard pressed to replace them.

From a financial perspective, though, the Patriots do at least have the means to sign players as they attempt to find replacements.

With more than $20 million in cap space – they entered the week with about $7 million in space – the Patriots have plenty of money to play with as Nick Caserio and Bill Belichick contemplate additions. One high-priced name that’s been bandied about as a fit in New England? Edge defender Jadeveon Clowney.

While his presence might help fill the void left by Dont’a Hightower – who is more of an off-the-ball linebacker but likely would’ve been the best edge defender on the Patriots roster this season – the Clowney addition doesn’t feel like the type of move Caserio and Belichick have been willing to make historically.

Remember, they traded Chandler Jones before giving him an extension. Trey Flowers left via free agency. High-priced pass-rushers haven’t found their way to Foxboro in some time.

And pass-rushers of a particular playing style – a style Clowney has exhibited at times in the past – aren’t always high on the shopping list for the Patriots, former team executive Michael Lombardi said on his GM Shuffle podcast recently.

«What does Clowney like to do? Clowney loves to run up the field,» said Lombardi, whose son Mick was recently announced as the team’s receivers coach.

«What does New England teach their defensive ends? To never run up the field. Let’s just put this in perspective. Belichick is going to spend A) $12 million a year for one player. Typically never does that, right? He just signed Cam Newton to the minimum deal. How do you think Cam would feel if he brought Clowney in and paid him $12 million a year? What do you think Cam would say? Like, what the [expletive]?

«Seriously what’s going on here? . . . There’s no way this makes any sense. A) They would never pay one player, especially after they got [Newton]. B) [Belichick] wants defensive tackles. Unlike the Raiders, who have no idea how to stop Patrick Mahomes in terms of building their football team, Belichick knows the only way to get to Patrick Mahomes is through the middle.

Lombardi’s podcast aired on July 15, well before Hightower opted out and well before the Patriots made the salary-cap gains they have this week.

Dareus, Damon Harrison, Timmy Jernigan and Jarran Reed are all free agent defensive tackles who could provide the Patriots a boost on the interior of their defensive line. Everson Griffen, Ezekiel Ansah and Jabaal Sheard are among the defensive ends still available in free agency.

If the Patriots are looking for some linebacker depth via free agency, some of the off-the-ball options would include Nigel Bradham, Mychal Kendricks and former Patriots Dekoda Watson.

We took a look at some in-house options to fill in for the irreplaceable Hightower here.