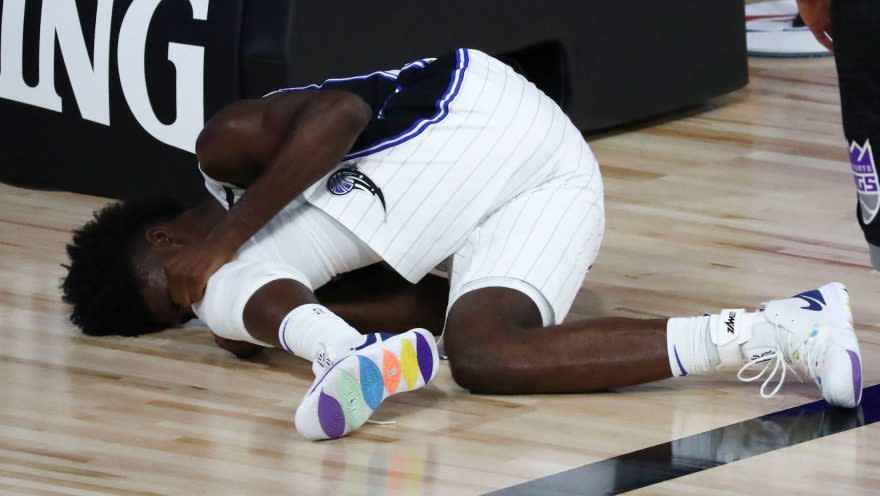 Let’s hope this is not as bad as it looks.

The Orlando Magic’s Jonathan Isaac had to be taken off the court in a wheelchair after a left knee injury — the same knee where an injury had caused him to miss 10 weeks of play before the NBA was shut down.

This was a non-contact injury, Isaac was driving the lane and tried to plant on his left leg, and his knee just buckled.

Isaac will have an MRI done, Magic coach Steve Clifford said after the game. This is something that can be done on the NBA’s Orlando campus, meaning he doesn’t have to leave the bubble. That said, it’s hard to picture him returning to play anytime soon.

Isaac had returned for the restart from a posterior lateral corner injury of his left knee as well as a bone bruise that had happened back in January. He was wearing a sturdy brace on his left knee during games.

Isaac had made more news in Orlando for his decision to stand for the national anthem, explaining his decision was based on religious grounds.

This injury was a blow to Isaac’s Magic teammates. Aaron Gordon said he was in tears.

Jonathan Isaac’s knee injury tonight felt like a gut punch to Magic players, even without knowing the severity of the injury. Aaron Gordon described his own reaction movingly: pic.twitter.com/ei3UHnBhO5

All these injuries have come in a season Isaac was making a leap on the court.  On offense, he’s averaged 12 points and 6.9 rebounds a game, both career bests. However, his bigger impact is on the defensive end, where he is a long, athletic, switchable defender averaging 2.4 blocks and 1.6 steals a game. He might have made the All-Defensive team if healthy.

Now we just hope he will be healthy for next season.