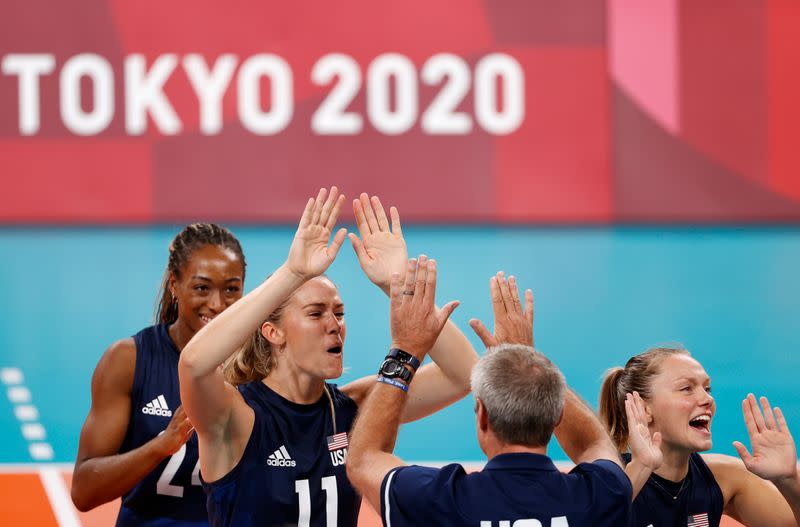 TOKYO (Reuters) – The U.S. women’s volleyball team are one win away from their first Olympic gold medal after beating Rio silver medallists Serbia in straight sets in Friday’s semi-final at the Tokyo Games.

The United States, who had won bronze at Rio, advanced to Sunday’s final with a 25-19 25-15 25-23 victory over the world champions at Ariake Arena.

U.S. opposite Andrea Drews scored 17 points while outside hitter Jordan Larson had 15. Ace spiker Jordan Thompson remained on the bench due to an ankle injury.

Tijana Boskovic scored 19 points and had three blocks for Serbia, who struggled with the variety of the U.S. attacks.

«We struggled a little bit in the beginning, but once we got passing under control, we were able to run strong offence. Our blocking and defence was another good spot,» she said.

The United States have won three silver and two bronze medals in the event, but never gold.

The 34-year-old Larson, playing at her third Olympics, has a silver and a bronze.

«Hopefully I will complete the series,» she said.

The United States will face the winners of the second semi-final between Brazil and South Korea, due later on Friday.

Serbia did not play their best game but head coach Zoran Terzic said they would pick themselves up for the bronze medal match.

«I don’t know what, but something was missing, maybe some energy,» he said.

«But ok, we’ll try to recover energy and smiles for the next game.»