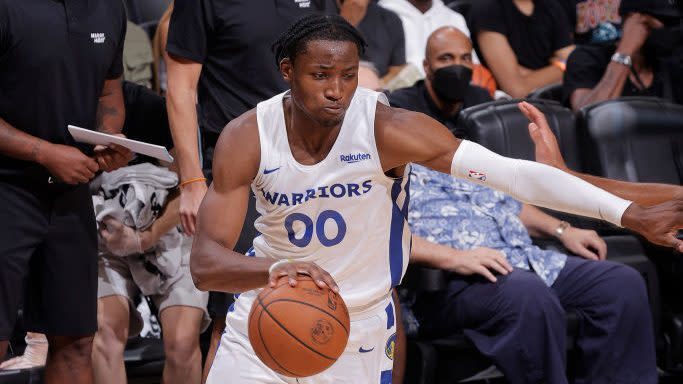 LAS VEGAS — There is far too much action at NBA Summer League to catch it all. Here is what I caught on Day 2 from Las Vegas.

Not a three-point shooter. Not going to help the Warriors make a deep playoff run as a rookie.

But he is… something,

And in a couple of years the Warriors could have something special.

One Summer League game is about as meaningless as it gets, but it’s worth noting you just couldn’t take your eyes off Kuminga, who finished with 16 points and six boards against the Magic. What you saw was a rare kind of athleticism that he just has not yet figured out how to harness. His feel for the game just isn’t there yet, which is probably why teams got scared off and let him fall in the draft to the Warriors at No. 7. But he also can make plays that impress.

He is a project, but for a guy learning how to play the game being around Stephen Curry and Draymond Green is a crash course. Kuminga could end up being a steal for Golden State, but Warriors fans need to be patient.

• As I said yesterday, if a player got regular run as a rookie then returns to Summer League, he should dominate (if not, it’s concerning). Monday, the Grizzlies Desmond Bane and the 76ers Tyrese Maxey fit right into that category — both are just too good to be here.

Maxey scored 21 and looked every bit the player who has graduated from this level. He was too quick, too savvy, just flat out too good for Mavericks defenders. He toyed with them.

Bane is too smooth and a step ahead of these games, seemingly always in the right place and hitting his shots. He finished with 32 points on 10-of-19 shooting overall, 6-of-8 from 3, and he would have had more than four assists if his teammates could finish.

Bane said postgame coaches wanted him to get the ball in his hands and work on his playmaking, and the results were up and down — he made some good decisions, struggled at other times, but that’s what Summer League is for. On the bright side, the Bane/Xavier Tillman pick-and-roll overwhelmed the Nets’ defense.

• Also on the too good to be in Vegas list: The Knicks Immanuel Quickley.

Apparently Quickley is a morning person, the Knicks and Pacers had an 11 a.m. start local time and he tore Indiana up to the tune of 32 points.

• In the first half of the Bulls’ eventual loss to the Pelicans, Patrick Williams looked like a guy in the Maxey/Bane/Quickely category of having moved beyond this league: He was hitting threes, floaters, showing potential as a pick-and-roll ball handler and scored 14 points by the break. He looked like peak Williams from last season.

Then came the 0-of-7 shooting second half with three turnovers. He reminded everyone of how much development he still needs. It’s still a process with Williams, but the potential is there.

• LiAngelo Ball is a draw. There was an impressive crowd for a Monday afternoon Hornets vs. Kings game, and every time Ball went up to shoot, or drove, or made any kind of play, the arena started to buzz.

Ball finished with 10 points on 4-of-8 shooting, 1-of-4 from three. In the first half, he didn’t seem as active as in his opening game, but he found spaces in the second half. Is Ball an NBA player? Um… Ball is a draw. I’m no scout, and he obviously has some skills, but I’m not sold on the entire package. At least not yet.

• Ziaire Williams lived up to the billing of being a smooth athlete, and had a pretty good first Summer League game scoring seven points. He has a lot of development, starting with getting stronger, but the athleticism is there.

• Speaking of living up to the billing, Davion Mitchell can help the Kings with on-ball defense now.

His offense was up and down, but he does look for teammates first and has some passing skills, finishing with nine assists to go with his 10 points.

• Devin Vassell had 20 points for the Spurs against the Timberwolves. He had a 27-point game in the Salt Lake City Summer League. Just a name for San Antonio fans to watch as he heads into his second season as a Spur. He looks like he learned some lessons as a rookie.

Notes from Day 2 of Las Vegas Summer League: Jonathan Kuminga is something originally appeared on NBCSports.com