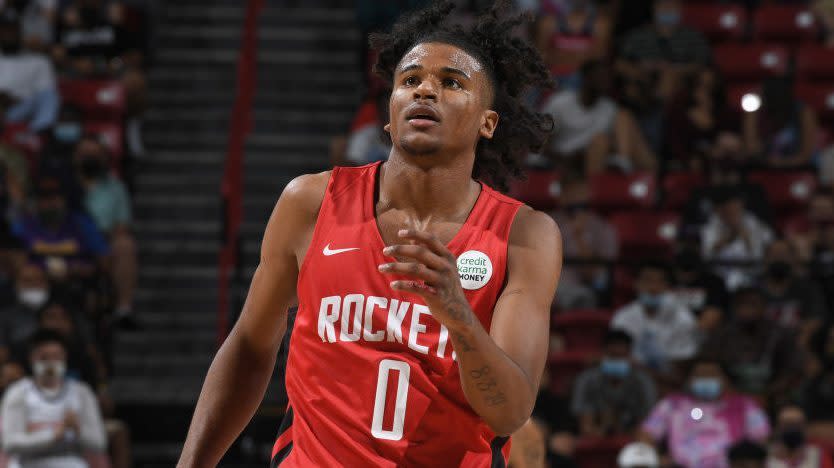 LAS VEGAS — There is far too much action at NBA Summer League to catch it all.

That’s why I will put together a notes column of things I see and hear during my time in Vegas, expect a few of these this week (I am in Vegas until Thursday). I didn’t see every game on the opening Sunday of the league, but here are a few things worth mentioning:

• Jalen Green is a bucket.

This shouldn’t be a shock, and not just because he’s the No. 2 pick and landed there because he can score inside and out. It’s also because in Las Vegas, the Rockets’ new wing is actually facing a step down in competition level from the G-League level he saw with the Ignite this last season — those G-League games were filled with legit NBA hopefuls and former NBA vets. Summer League has a lot of rookies and guys who will be playing in Europe next season.

“The ultimate goal for the G League Ignite was to be a pro and learn the game as much as we can before we head up to the NBA,” Green said, via the AP. “I think we accomplished that. We learned how to be a pro on and off the court. I think I showed it tonight.”

Whatever the competition, Green impressed and did it all. He scored 23 points, hit 4-of-9 from three, and had a couple of dimes. He looks like a player who can score Day One in the NBA — which is what the book was on him before the draft, but this felt like a confirmation.

Summer League is made for a scorer like Green (unlike the game of No. 1 pick Cade Cunningham), and that could carry over to their rookie seasons, where Green will continue to put up numbers.

• Speaking of Cunningham, he spoke about coming into a team as the No. 1 pick and trying to fit in.

“I know what the perspective of my teammates would be having the No. 1 pick come in,” Cunningham said. “I not trying to be a guy who comes in and is all about me and take all of that space up. I want to respect their space, they’re trying to build on their games. Saddiq [Bey] is coming off a, what was it, First Team All-Rookie? I want him to build on that, trying to elevate himself. For me, it’s just coming in and trying to be the best teammate I can be.”

• Speaking of Bey… One good rule of thumb with Summer League: If a player got regular run as a rookie, he should be a cut above everyone else at this event. The Piston’s Saddiq Bey was exactly that, just clearly better the competition when he was on the court in his Summer League opener, finishing with 14 points and 12 boards for the Pistons. He showed improved handles and with that created his own shot in a way we didn’t see a lot of during last season.

• Of course, COVID continued to reach into the NBA the way it has the rest of American life. The Wizards vs. Pacers game had to be postponed, and it’s not clear when enough Washington players will be cleared from health and safety protocols for them to resume play. The Rockets also were without a player due to COVID protocols.

• Lakers two-way player Austin Reeves had the putback game-winner of the day.

• Evan Mobley showed some flashes of the athleticism and potential that made him the No. 3 pick, but like many bigs entering the league, he has got to get a lot stronger to handle the contact at this level. Plus, his game just needs more polish. (This is not a knock, bigs just take longer to develop. Ask Deandre Ayton.)

• LiAngelo Ball scored 16 and looked sharp from three in his Summer League debut for the Hornets.

• Rockets’ first-round pick Alperen Sengun was a little more athletic than advertised and did some things well, with 15 points and 15 boards, plus a couple of highlight moves. He was active but had some rookie struggle moments, like when he got boxed in under the rim a few times, plus there were some other weak stretches. Still, he was making things happen.

Sengun got to the line 14 times in the game and his free throw routine is… unique. Before taking his shot, he appears to talk to the ball (ala Mark “The Bird” Fidrych).

• Nearly as strange, Luka Garza‘s free throw routine does not involve dribbling the ball. Even once. He gets the ball, walks up, toes the line, and shoots.

• The first time Thunder first-round pick Josh Giddey touched the ball he ran Cunningham into a screen (Cunningham got hung up on it), turned the corner, and drove in for a dunk.

He also made a couple of nifty passes but played just five minutes before spraining an ankle, and he was out for the game.

• Mo Bamba is not playing for the Magic at Summer League but he is in Las Vegas and practicing with the team. Bamba got more run at the end of last season after Nikola Vucevic was traded to Chicago, and how with a new coach (Jamahl Mosley) in Orlando, Bamba said he wanted to learn the system and get some work in with the new staff.

Notes from Day 1 of NBA Summer League: Jalen Green is a bucket originally appeared on NBCSports.com