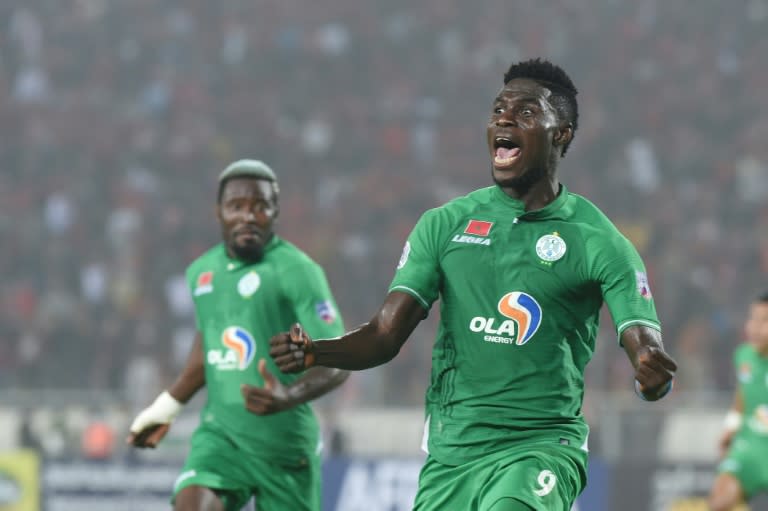 Goalkeeper John Noble starred as Enyimba squeeezed past Rivers United Sunday in an all-Nigerian CAF Confederation Cup showdown to secure a place in the group draw.

A Fortune Omoniwari goal just before half-time in Port Harcourt earned hosts Rivers a 1-0 victory in the second leg of a playoff and levelled the aggregate score at 1-1.

After each side converted four penalties, Rivers’ Israel Emmanuel had his kick saved by Noble, who then fired past former Enyimba goalkeeper Theophilus Afelokhai for a 5-4 shootout triumph.

Afelokhai moved to Rivers after losing out to Noble as first choice at twice CAF Champions League winners Enyimba.

Enyimba were among many winners of dramatic ties with three-time African champions Raja Casablanca of Morocco also needing penalties to survive in the African equivalent of the UEFA Europa League.

Raja lost 1-0 away to US Monastir of Tunisia, having won at home by the same score, and after Mohamed Saghraoui fluffed a spot-kick for the Tunisians, Ben Malango scored to win the shootout 6-5.

Twice African champions JS Kabylie of Algeria made an equally nervous entry to the mini-league stage, pipping Stade Malien of Mali on away goals after winning 1-0 at home.

Badreddine Souyah, who scored for the Algerians in a 2-1 first-leg defeat, netted again just four minutes into the return match and it proved the only goal of a physical encounter in Tizi Ouzou.

Zambian club Nkana, who have never lost in 64 CAF home matches stretching back to 1983, suffered a 17th defeat in 18 visits to north Africa, but still survived.

They fell 2-1 to second division side Tihad Casablanca in the Moroccan commercial capital, but qualified 3-2 on aggregate.

Nkana were in trouble at half-time as they trailed 2-0 with defenders Mahmoud Bentayg and Ayman Dairani scoring for a club that lives in the shadows of Casablanca giants Raja and Wydad.

But Simon Mulenga halved the deficit on 57 minutes, leaving Tihad needing to score at least twice to progress, and that task proved beyond them.

Gor were written off after losing at home to NAPSA Stars of Zambia, but led 2-1 in Lusaka entering stoppage time and were poised to win the tie on away goals.

However, NAPSA won a penalty in the 96th minute which Emmanuel Mayuka converted for his fourth CAF goal this season and a 2-2 draw meant overall defeat for Gor.

A string of brilliant saves by goalkeeper Razak Abalora helped Kotoko hold fellow former African champions Entente Setif 0-0 in Algeria, but they were eliminated after losing 2-1 at home last weekend.

On Monday, Cairo will host a draw at 1500 local time (1300 GMT) that places the clubs into four groups of four with the winners and runners-up advancing to the quarter-finals.