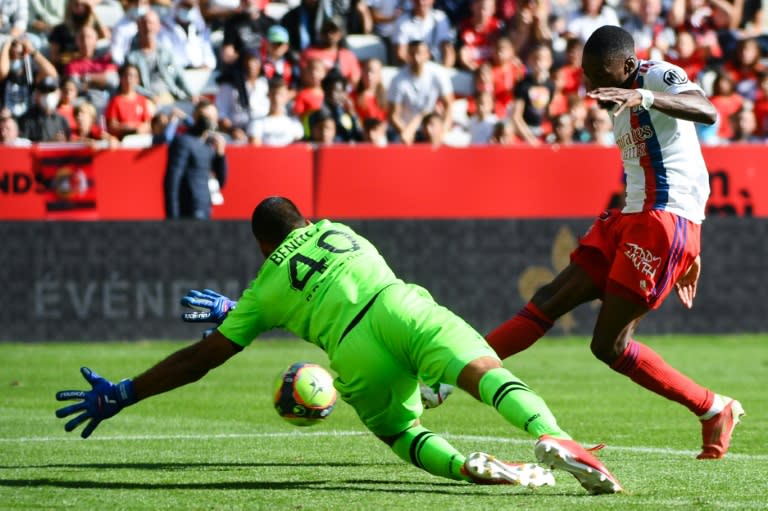 Nice came from behind to beat Lyon 3-2 at home in Ligue 1 on Sunday as substitute Evann Guessand scored his first senior goal three minutes into injury-time to clinch victory.

Nice scored three goals in 12 minutes after Lyon had led 2-0.

Guessand, who only turned 20 in July, was shown a yellow card for celebrating the crucial goal which put his side second in the table, eight points behind Paris Saint-Germain who play Marseille later Sunday.

«We showed to ourselves that we’re able, at 1-0, 2-0, even with 10 minutes left, to come back into games, it’s a strong lesson,» Nice captain Dante told reporters.

«We put a big marker down today, not by the score, but by our attitude, bevahiour and reaction. It does a lot of good, I hope we continute like that until the end of the season,» he said.

The home side’s comeback was sparked with nine minutes left as Algeria left-back Youcef Atal pounced to open his account for the campaign.

With five minutes to go Lyon’s Zimbabwe left-back Tino Kadewere was shown a red card for a challenge on Melvin Bard.

Nice, owned by British billionaire Jim Ratcliffe, equalised from the spot with a minute of normal time remaining as Atal’s international team-mate Andy Delort converted from the spot.

The three points were secured after 93 minutes as Guessand fired through Lyon goalkeeper Anthony Lopes’ legs to send the Allianz Riviera crowd into delirium.

Parisian fans have been blocked from travelling south for the Marseille game following recent crowd trouble at games in France.

Earlier, the French government promised «coordinated action» with the football league against the issues in stadiums this season, in a letter seen by AFP.

The authorities want to put together a «national security and coordination group» with the different ministries alongside football officials to discuss the problems.

It is set to be Lionel Messi’s first taste of Ligue 1’s most biggest rivalry after the Argentina forward scored twice in the midweek Champions League win over RB Leipzig.