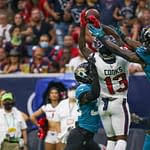 Welcome to the NFL Yahoo Cup Three and Out! This free-to-enter, single-entry fantasy football contest consists of 18 rounds where the top 25,200 entry overall and top 1,000 entries per round share $150,000, with $10,000 to first overall and $1,000 + YFFC Live Final entry to first per round. Scoring will be cumulative across all rounds, with your three lowest scores dropped at the end. You may join this multi-round NFL DFS contest at any point, but enter today to give yourself the best chance to take home the title. Click here to begin the chase!

We will focus on three players — one quarterback, one running back and one wide receiver — to be NFL DFS picks for Week 8’s NFL Yahoo Cup contest.

Hurts has been the model of consistency in his young NFL career. He has now played in 10 games as the full starter, scoring at least 21.8 Yahoo points in each of them. Patrick Mahomes ($41) fell short of that mark last week and in Week 5, and Kyler Murray ($40) also has two games this year under Hurts’ floor. Yet Hurts is still priced as if he is a tier below these quarterbacks. That would be reasonable if quarterbacks only got points for passing production. However, Hurts is rushing for over 50 yards per game this year and has five touchdowns rushing. This would make Hurts the No. 23 running back on the season, even if he never threw the ball.

Against the Lions there is no reason to believe Hurts’ streak will not continue. Detroit has the 27th-ranked defense in the league by DVOA and has given up the eighth-most points to opposing quarterbacks on the season. With the Eagles only slight favorites (-3.5), it is unlikely for this game to be a blowout, which should keep Hurts pushing the ball all game. Hurts is the only quarterback with an A grade in both raw points and value in Awesemo’s rankings this week.

Yahoo must have missed the Patterson memo with their pricing this week. Patterson was being used more sparingly earlier in the season by the Falcons, but he is now their top running back — and an easy fantasy RB1, ranking ninth in Yahoo points at the position. The past two weeks have shown the Falcons’ commitment to Patterson as a rusher. They have fed him 14 targets in both games, significantly more than nominal starter Mike Davis (17 combined carries) in that span. That goes with his already solid receiving role; Patterson is averaging 6.6 targets per game since Week 2.

The Falcons offense in general has come alive the past three games. Their first three games produced an average of 16 points per game, and the last three have averaged 29. It is no coincidence that this has correlated with Patterson’s usage. Head coach Arthur Smith will likely use a solid dose of Patterson this week against the Panthers, who rank 19th against the run by DVOA.

Yahoo simply missed this one with their pricing algorithm. Patterson is cheaper than timeshare backs like Jamaal Williams and Rashaad Penny. He has an A in value in Awesemo’s rankings this week.

Cooks is another player who is far too cheap on Yahoo this week. While not as egregious as Patterson, Cooks’ role is far more valuable than his $15 price tag would suggest. He is third in the league in target share and a top-20 receiver in fantasy scoring on the season. Targets from Davis Mills are not quite as valuable as those from other quarterbacks, but they are still targets.

This week against the Rams that target share could mean a ton of chances for Cooks. The Texans are 14.5-point underdogs and will have no choice but to throw the ball in an effort to keep up with the Rams. This is nothing new for the Texans this season, but that is why Cooks has 13- and 14-target games on his log already this year. It is not the best matchup against a stout Rams defense, but the Texans have little behind Cooks offensively. He is one of only five receivers with an A value grade in Awesemo’s rankings this week, and he has the best overall points grade among them.

The post NFL Yahoo Cup Three and Out: Round 8 appeared first on Awesemo.com.