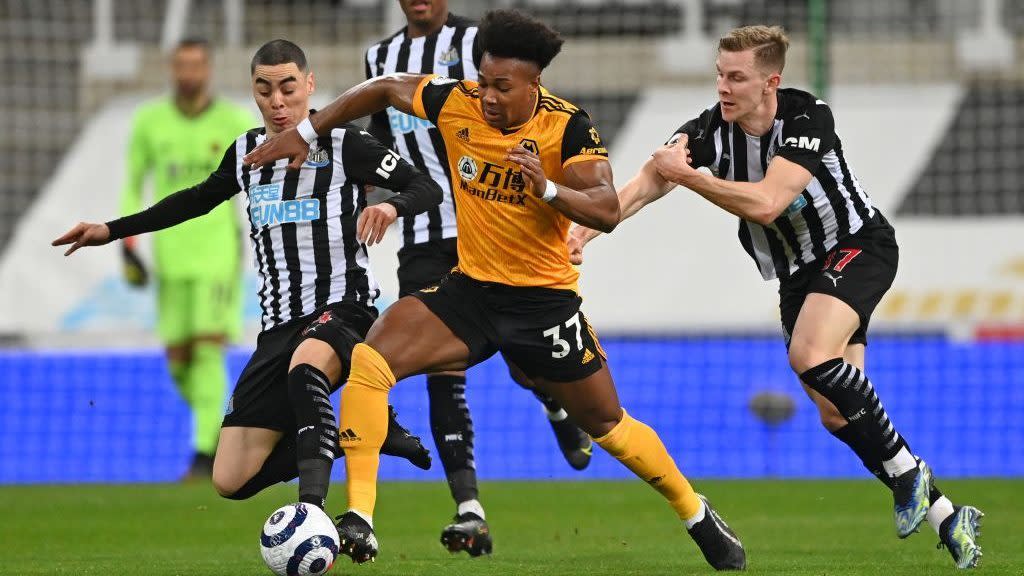 Newcastle United took one point from Wolves on Saturday at St. James’ Park, but it could come with quite a price tag.

The club lost its best player in Allan Saint-Maximin and in-form Miguel Almiron to in-game injuries in the 1-1 draw that pushed them four points outside the bottom three with 12 matches to play. Versatile back Emil Krafth also limped off with 18 minutes to play.

“A point is a point,” said Newcastle boss Steve Bruce, via the BBC. “It could be enough. We’ll have to wait and see. The players are frustrated because they played very well but unfortunately gave away a bad goal. We could do with a bit more luck with the injury situation.”

Newcastle’s been much better recently after a remarkable aimless and winless run saw it spiral from midtable to the precipice of the relegation zone.

Many have noted that the hiring of former Luton Town boss Graeme Jones to assist Bruce has coincided with the team’s uptick in performances.

The Magpies beat Everton and Saints and lost to Crystal Palace, Chelsea, and Manchester United. The Palace saw the Magpies fall victim to a pair of early defensive lapses and fail to find an equalizer despite controlling the match. The Chelsea and Man United losses are fairly easy to put to the side.

“I’ve enjoyed watching us play today but disruptions and injuries to our big players is the biggest concern,” Bruce said. “For Miggy [Almiron] to be upset like he is, we fear the worst.”

Almiron went knee-to-knee with Adama Traore near the half-hour mark, winning a 50-50 ball and requiring trainer’s help before returning to the pitch. He’d sub off at halftime, while Saint-Maximin walked off very gingerly in the 63rd minute with an apparent groin injury. Krafth departed nine minutes later.

The Magpies next three matches could see them seal their safety to some extent. They’ll visit 19th-place West Brom and 16th-place Brighton with a visit from Aston Villa in between.

The club then will find points hard-to-find from April 3 – May 12, when Burnley is the only non-big name or high-flyer on the fixture list before the Magpies finish home to Sheffield United and away to Fulham.

“There’s still a long way to go,” Bruce said. “Everybody in the bottom half will be looking over their shoulder. It’s an accumulation of points that matters so let’s take the positives.”