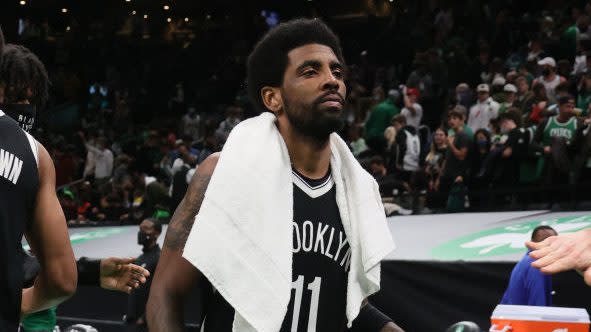 We knew it was coming, but now it’s official: Kyrie Irving has been listed as ineligible by the team for its preseason home opener Friday against the Bucks.

This is the first game Irving will miss because he is not vaccinated and New York (like San Francisco and Los Angeles) has a vaccine mandate in the city for entering indoor public spaces such as restaurants, gyms, or the Chase Center where the Nets play.

The NBA has said it plans to dock players pay for games missed because they do not follow the local vaccine mandate — in the case of Irving, roughly $363,000 a game — but the NBA players’ union has said it did not agree to that and plans to challenge that idea.

Brooklyn enters the season as the title favorites, but not having one of their big three for home games both weakens the team on the court and could prove to be a distraction. Brooklyn players and the organization have talked about focusing on basketball and a title, and Irving not playing at home could derail that.

Of course, Irving’s teammates and Nets management played all that down the past couple of days, starting with James Harden.

Harden was asked if the Nets can make it work with only having Irving on the road and essentially said it would be on them to figure out.

Brooklyn GM Sean Marks told Kevin O’Conner of the Ringer that this has been a bigger deal in the media and with fans than in the Nets locker room.

“It’s definitely out in the Twitterverse more than it is in our locker room, without a doubt,” Marks says. “All I can tell you is what he’s told everybody: It’s a private matter, and he needs to talk to the right people and figure out in his close circle what he wants to do.”

The Nets have a veteran team — eight players over 30 — and they are better suited to handle this distraction than a younger squad. Kevin Durant, James Harden, Blake Griffin, Patty Mills, LaMarcus Aldridge, and Paul Millsap have all been around drama before — and in a few cases, caused it themselves — and know how to tune it out and focus on the task at hand. This roster is not going to be bothered by Irving only playing and practicing on the road.

However, the Nets aren’t as good without Irving, and their status as clear title favorites may be in jeopardy without him.

Check out more on the Nets