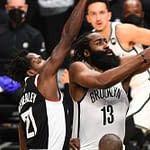 Welcome to the NBA Yahoo Cup Picks for Round 5! This is a Free to enter, multi-round, single-entry contest with 24 rounds where the top 6,950 entries overall and top 540 entries per round share $50,000, with $10,000 to first overall and $100 to first per round. Scoring will be cumulative across all rounds. Your five lowest daily fantasy basketball scores will be dropped, and you can enter at any point, but enter today to give yourself the best chance to compete for the title. Click here to begin the chase!

The focus will be on three players — one guard, one forward, and one center — to be NBA DFS players for Round 5’s NBA Yahoo Cup contest.

One aspect to note for the Yahoo Cup slate is it does not include the Hornets – Knicks game, so there are 10 to choose from.

Harden costs a significant amount of the salary cap, and he is tied for being the seventh-most expensive player on the slate. Spending this amount of the cap requires a ceiling, and Harden presents that in this game environment. He has had a bit of a slow start, but that makes it possible to get ahead of an uptick in production before the salary goes up, and he recorded his second triple-double last game in just 30 minutes.

The Nets travel to New Orleans to clash with the Pelicans. This is a matchup of two teams that are in the top half of the league in pace, and New Orleans is 28th in defensive rating this year. They have also struggled mightily containing either guard spot, but especially point guards. The Pelicans are 28th in points allowed to the position, and both of their starting guards have defensive ratings over 110. For context, the league average is 107, and Harden has a 26.6% usage rate and 1.26 fantasy points per minute this year. What stands out is how often Harden runs an isolation play. He is second in frequency (31.5%) and has the second-most points scored in that play type. Harden is also shooting about 3 percentage points lower in that play type than last season, so there is room for improvement, which is scary for a player of Harden’s skill level.

Spending up at one position means that there has to be a value or two along the way to get the lineup under the salary cap. The Lakers host the Timberwolves tonight, and the game environment looks like a fantasy goldmine in the NBA Yahoo Cup. Both teams are in the top nine in pace and the top eight in possessions per game, and they are 13th and 16th in defensive rating. That is the kind of game to chase, and the Lakers have five players out with injuries, including LeBron James. That has allowed Carmelo Anthony to play around 30 minutes off the bench per night.

The sample size for Anthony without James is up to 241 minutes, and Anthony has a 20.4% usage rate and 0.90 fantasy points per minute. The main contribution is going to be his scoring, so there is volatility inherent with a shooter with limited peripheral stats. Anthony has been lethal shooting 3’s, converting 50% of his attempts, and the Timberwolves allow the eighth-highest frequency of attempts in the league. On top of that, Anthony is 13th in points from spot-up shooting this season, and Minnesota has faced the 10th-most spot-up attempts. To their credit, they have held opponents to 34.1% on those attempts, but facing that volume of attempts means it cannot stay that low forever. Anthony should help that number see some regression tonight.

This may look like chasing because Kaminsky scored a career high in points last game. However, there is much more to support this play for the NBA Yahoo Cup. First off, the salary remains very affordable and is only $6 above the minimum on the site. Second, starting center Deandre Ayton is doubtful and has been dealing with a leg injury. In his absence, Kaminsky and JaVale McGee have been sharing playing time, but Kaminsky has played at least 28 minutes in three of the last four games without Ayton.

He has 1.17 fantasy points per minute and has over five touches in the paint per game when Ayton has been missing. Memphis is 22nd in points allowed in the paint, and that leads into the next facet of Kaminsky’s appeal tonight. He is second in frequency of being the roll man in the pick-and-roll. Considering Chris Paul is the ball handler in that play more often than not, Kaminsky just has to get to the right spot and he will get the pass. On top of that, Memphis is fourth in points allowed, last in points per possession allowed and 29th in field goal percentage allowed to the roll man.