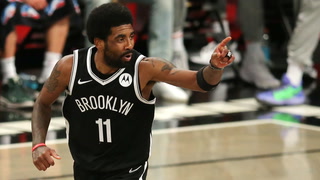 SNY NBA Insider Ian Begley reacts to comments from New York City mayor-elect Eric Adams concerning vaccine mandates, after Adams said that the current mandate that prevents Kyrie Irving from playing home games at Barclays Center will not change. Adams put the onus on the NBA and Irving to come up with a solution to get the Brooklyn Nets star back on the court. For more Ian Begley: https://sny.tv/tags/ian-begley About Ian Begley: Ian Begley joined SNY in 2019 as the network’s first NBA Insider covering the Knicks and Nets. His show, «The Putback with Ian Begley,» appears weekly on SNY.tv, and Begley is also a regular contributor to «GEICO SportsNite.»