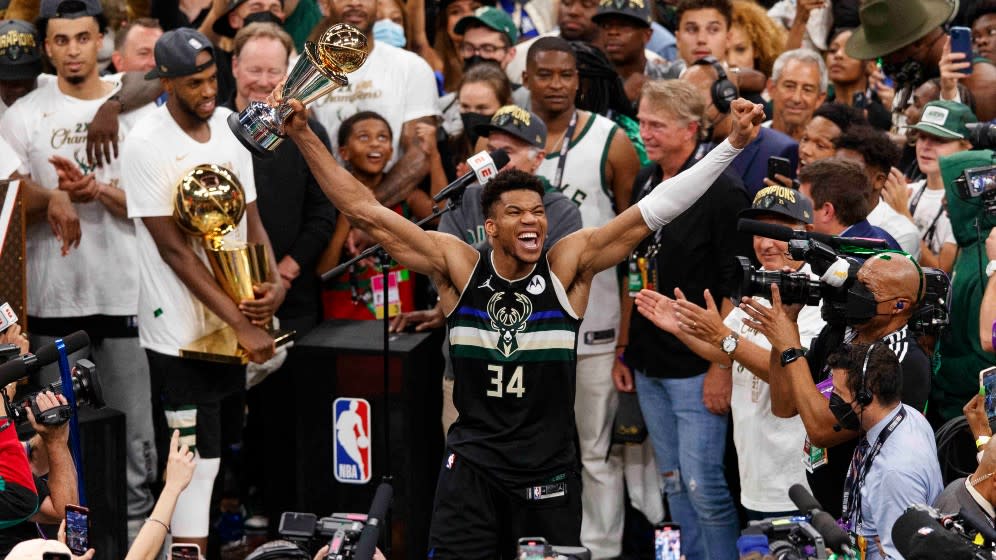 The Milwaukee Bucks begin their NBA title defense on opening night of the 2021-22 season Tuesday, hosting the Brooklyn Nets in an Eastern Conference heavyweight showdown.

Milwaukee snapped a 50-year championship drought when it erased a 2-0 series deficit with four straight wins over the Phoenix Suns in the 2021 Finals. Now, Finals MVP Giannis Antetokounmpo and Co. will be trying to become the first team to repeat as champions since the Steph Curry-Kevin Durant Golden State Warriors in 2017 and 2018.

But the road to a repeat won’t be easy, as several teams look primed to challenge Milwaukee for this season’s Larry O’Brien Trophy.

Before a champion is crowned in 2022, here’s a look back at the history of past title winners and non-winners:

Which NBA franchise has won the most championships?

The most storied rivalry in NBA history features the two franchises who have won the most championships. The Los Angeles Lakers and Boston Celtics are tied for the most titles with 17.

Boston and L.A. have met in the Finals a record 12 times, with the Celtics taking nine of those head-to-head matchups. Their most recent Finals bout came in 2010, when Finals MVP Kobe Bryant led the Lakers past the Celtics in seven games. They also squared off two years prior to that, with the C’s winning in six games.

There’s a big drop-off after the Celtics and Lakers. The Warriors and Chicago Bulls are tied for the third-most championships with six. All of the Bulls’ titles came during the Michael Jordan era in the 1990s, courtesy of two three-peats. Meanwhile, the Dubs captured half of their titles within  the last decade, winning three of four from 2015-18.

Sitting alone in fifth with five championships are the San Antonio Spurs. Gregg Popovich and Tim Duncan were the foundation of a dynasty in San Antonio that won all five of the franchise’s titles from 1999-2014.

Sitting outside the top five are the Miami Heat, Detroit Pistons and Philadelphia 76ers with three championships apiece.

Which NBA franchises have never won a championship?

Of that group, only the Pacers, Nets, Suns, Jazz and Magic have reached the Finals. The Suns have suffered the most Finals losses of any franchise without a title, losing to Boston in 1976, Chicago in 1993 and Milwaukee in 2021.

What is the longest current NBA championship drought?

The longest current title drought doesn’t actually belong to a franchise that has never won one. The Sacramento Kings last took home a championship in 1951, when they were the Rochester Royals. That 70-year stretch without a title currently stands as the longest drought. Sacramento also owns the longest active playoff drought at 15 years, which is tied for the all-time record.

The Atlanta Hawks, who last won it all in 1958 as the St. Louis Hawks, have gone the second-longest stretch without a championship at 63 years, followed by the Suns at 53 years.

Who are the winners of each NBA championship?

Here’s a look at every NBA champion in league history:

Report: Aaron Rodgers wants Davante Adams, MVS with him in 2022