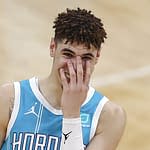 Friday, Nov. 5, brings a nine-game main slate teeming with injury news despite Detroit being the only team on a back-to-back. Let’s look at the player pool and discuss the top NBA DFS picks for DraftKings, FanDuel and Yahoo lineups. Do not forget to head over to the Awesemo NBA DFS home page for more great written daily fantasy basketball content.

**Be sure to check out Awesemo’s free premium content today: NBA Player Rostership Projections, which will help you when making NBA DFS picks.**

Reigning Rookie of the Year LaMelo Ball has really stepped up over his last three games. Though he is listed as dealing with a bruised hip, he is expected to be a full-go, with 48 hours off since his last game. Tonight’s matchup with Sacramento is a good one, and the 226 projected point total is the highest of the night. The Kings and Hornets are both top five in pace, top 10 in offensive efficiency and, most importantly, bottom 10 in defensive efficiency.

Ball is averaging 1.33 Yahoo points per minute, which is up from 1.22 during his rookie campaign. Over his last three games, he is averaging 33.6 minutes and 18.7 field-goal attempts, including 7.7 from behind the arc at a 39.1% success rate. This has resulted in per-game averages of 23.7 points, seven rebounds, seven assists and three combined blocks/steals. If the bruised hip is worrisome, then an easy pivot would be to Ja Morant ($40) for just a few dollars more in a desirable matchup against the Wizards.

Minnesota had a strong first-half showing against the Clippers on Wednesday before a 20-6 run, led by Reggie Jackson and Paul George, put them in a deficit that they only shrank to 5 points at best. Tonight these two teams are squaring off once more, with the Clippers only favored by 3 points.

The Timberwolves will be without D’Angelo Russell (ankle), and while that does not help the team, it does increase the usage for Karl-Anthony Towns to 30% when the two have not been on the court at the same time since the beginning of last year. Anthony Edwards ($33) has really stepped up his game and is averaging 23.9 points per game on the season. This means that defenses can no longer focus on Towns, and with his inside-out game he should thrive tonight against the likes of Ivica Zubac and Isaiah Hartenstein. Paul George ($49) is an intriguing option as part of a game stack with Towns and Edwards.

Dejounte Murray is a nice contrarian option in tournaments today on this larger than usual Friday slate. He has been mentioned several times already in this column, though that was because his salary was lower than it should have been for his increased role and responsibilities. Now that his salary is starting to catch up with the new baseline, gamers are going to view him as too expensive. That is simply not the case tonight against the Magic, who are nowhere near as good on defense as gamers seem to think. Last year they were in the bottom quarter of the league for defensive efficiency, and this year they have the fourth-worst rating for that metric.

DeMar DeRozan and Patty Mills are no longer with San Antonio, and Jakob Poeltl is in the health and safety protocol. That means Murray and fellow guard Derrick White ($25) will be the main offensive facilitators and primary scorers. Murray missed all of the 2018-19 season with a torn ACL, and he was slowly brought back in 2019-20 with monitored minutes and very few back-to-back games. Last year he started to breakout while averaging 1.11 Yahoo points per minute on a career-high 31.9 minutes per game. This season he has averaged 34.1 minutes and an impressive 1.33 fantasy points per minute. Every night he is going to be a threat for a triple-double, and while he will likely only get a handful this season, he is one of the best rebounding guards in the league, with 7.1 last year and 7.8 through eight games this season.

After missing a game with a sore calf, Patrick Beverley joined the starting lineup on Wednesday and dropped 34 Yahoo points in 31 minutes against these same Clippers. That makes five straight games where he has topped 22 Yahoo points with his new squad, and he should be in line to reach that milestone once again tonight with Russell out of commission.

Thaddeus Young ($14) is an intriguing option coming off the bench for the Spurs in what should be an up-tempo matchup against the Magic. There is some question about his minutes, but he has played 16, 15 and 22 in the last three games. Yahoo scoring gives 3 points for blocks and steals, which are both categories that are above average for Young.

Drew Eubanks ($10) is in play if he starts again, but it will cost the center slot, and there are other options up and down the salary list with better per-minute and per-dollar projections. Finally, Devin Vassell ($12) is the third of the discount dandies from San Antonio. They desperately need his scoring without Poeltl, and Vassell has seen 27 and 31 minutes off the bench in the last two games, with a dozen field goal attempts in each. Plus, he chips in across the board, giving him reasonable access to 30 Yahoo points.

Tonight there is a staggered slate, with six games tipping off in the first hour and then a two-hour respite until the trio of West Coast games tip off at 10 p.m. ET. There is no reason to put anyone in the player pool who causes unease since there are 18 teams in action. Keep in mind that salaries and scoring formats differ across the various fantasy sites, and a slam-dunk play on Yahoo may be a below-average NBA DFS pick on DraftKings or FanDuel.