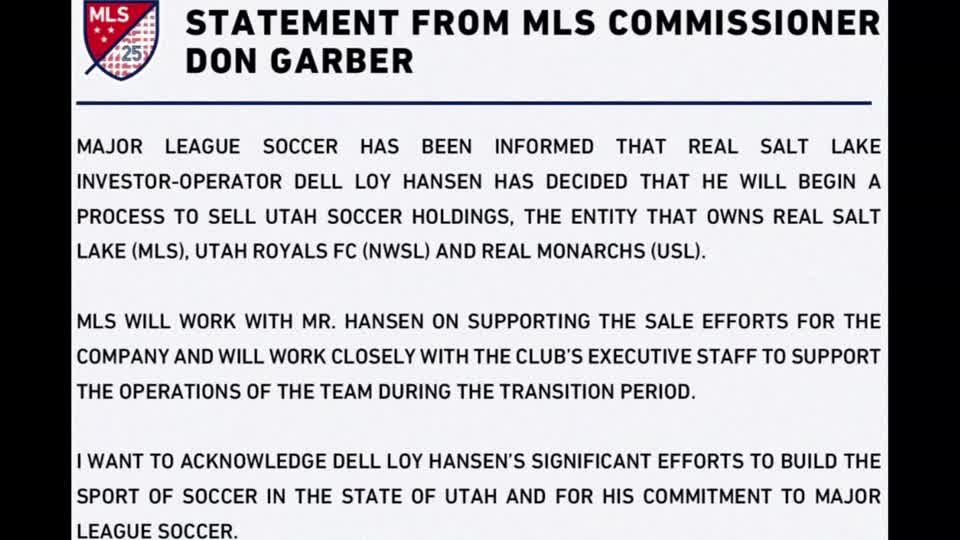 STORY: Major League Soccer (MLS) said on Sunday (August 30) that Real Salt Lake owner Dell Loy Hansen, who is being investigated by the governing body over allegations that he had used racist language, is set to sell Utah Soccer Holdings.

Hansen had come under fire after criticising players for refusing to take the field in protest against racial injustice following the police shooting of Jacob Blake, a Black man, in Kenosha, Wisconsin.

«MLS will work with Mr. Hansen on supporting the sale efforts for the company and will work closely with the club’s executive staff to support the operations of the team during the transition period,» MLS Commissioner Don Garber said in a statement

«I want to acknowledge Dell Loy Hansen’s significant efforts to build the sport of soccer in the state of Utah and for his commitment to Major League Soccer.»

Hansen had condemned the players’ decision to protest and likened it to being «stabbed», saying the «disrespect was profound».

Garber had issued a statement on Thursday when the investigation was announced, stating that he «strongly disagreed» with Hansen’s comments and that they did not reflect the views of the MLS.

The MLS Players Association had described the allegations as «sickening» and implored the league to suspend Hansen, adding that he should be forced to sell the team if the allegations were substantiated.

«He needs to sell the team,» American striker Jozy Altidore said earlier this week. «I’m involved in a group that’s ready to purchase it. Time for change.»

NWSL Commissioner Lisa Baird said in a statement on Sunday that the sale was «in the best interest» of the women’s team and league.

«Mr. Hansen’s contributions to the league’s growth and the continued development of soccer are notable, but we agree that the decision is the right one for the future of the Royals,» she said.