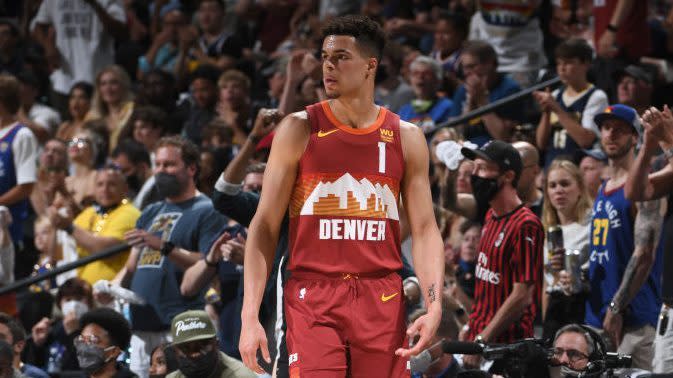 How much money should the Nuggets give Michael Porter Jr.?

The athletic, a little raw but improving, forward was the team’s third-leading scorer last season at 19 points a game, second in rebounds at 7.3 a game, he shot 44.5% from three, and his potential as a versatile defender could be critical to the Nuggets on that end. His shot selection and decision making are improving. His role on the team will grow this season with Paul Millsap gone, especially until Jamal Murray returns.

He’s also dealt with injuries, having missed his entire rookie season with a back issue and then being out 18 and 11 games the next two seasons (coronavirus protocols sidelined him part of this past season).

Porter is eligible for a rookie contract extension, with a max of $168 million. Considering his injury history, do the Nuggets want a discount? Would Porter take less than the max? Porter Jr. told Michael Singer of the Denver Post the sides are talking.

“Everything is sounding great, in the direction that I’d like to be headed,” Porter said. “Nothing is set in stone, but everything is going smooth as far as that goes.

“One thing about Mark [Bartelstein, Porter’s agent] – something probably could’ve been done already but Mark is the best in the business,” Porter added. “I told him, ‘Take your time, do your thing. I’m in no rush, I’m in grindmode. I’m not stressed about it. I’m just in the gym, and whenever you’ve got some news for me, hit me up.’”

The two sides have until the start of the season to reach a deal, or Porter Jr. would head into restricted free agency next offseason.

Denver is also in talks to extend Aaron Gordon, who is entering the final year of his contract at $16.4 million. The Nuggets will need to max out Nikola Jokic in the summer of 2023 when his deal is up. Add a max (or even near max) Porter into the mix and that’s a lot of money for a franchise that has been historically hesitant to pay the luxury tax. The salary cap is rising again with people back in the building, and a new television deal is coming in 2024, but how much Nuggets ownership is willing to pay is still a legitimate question.

All that said, the Nuggets are not going to let Porter Jr. go, a deal will be reached. The only question is the number.

Check out more on the Nuggets