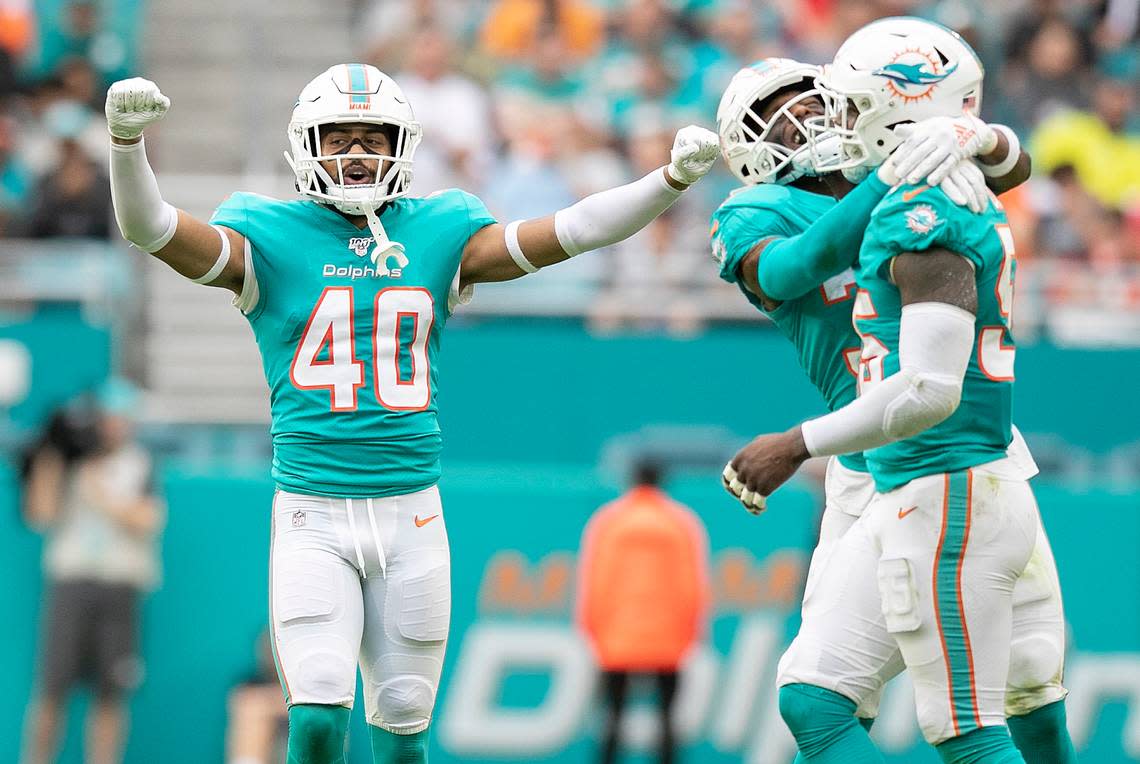 A six-pack of Miami Dolphins notes on a Friday:

▪ Amid a national pandemic, the NFL and the league’s players union still don’t have an agreement over safety protocols for this season or rules for training camp.

And that’s a concern for many players around the league, including several Miami Dolphins, who voiced their thoughts on social media this week, with rookies due to report on July 21 and training camp set to start on July 28.

Among Dolphins players weighing in:

Cornerback Byron Jones: “Frustrating to hear the NFL has yet to address major issues regarding player health + safety with training being 2 weeks away. We just want to play football. Make it happen @NFL.”

Cornerback Nik Needham: “Just want to play football… but we need the @NFL to step up and create a safe work environment for us. #safetyfirst.”

And in response to an NFL Network report that teams will be forbidden from postgame interactions within six feet of each other and no longer be allowed to exchange jerseys in 2020, Needham said: “Let’s At least Make It Make Sense.”

(That rule does seem ludicrous considering players will be breathing on each other for three hours.)

Defensive end Shaq Lawson also greeted that jersey-swap edict with laughing emojis, adding: “We can’t trade jerseys. But we making contact with a player every play.”

Safety Kavon Frazier: “Two weeks left before the camp date that was given and still no progress on making it safer for the players. @NFL We want to play but #SafetyFirst !!!”

Cornerback Ryan Lewis: “Dear @NFL, please address the health and safety concerns so we can play football this year! I know everyone wants to see football this year, but we need the NFL to step up and create a safe work environment for us. #SafetyFirst”

▪ Nobody knows yet if the Miami Dolphins’ offensive line will be better than adequate, with uncertainty about whether rookie picks Austin Jackson and Robert Hunt will be effective.

But there are few teams who improved their line more.

Pro Football Focus asserts that the Dolphins’ offensive line is the second-most improved in the NFL, behind only Cleveland’s.

“The Dolphins’ 47.3 overall grade as a line was nearly six points lower than any other team, owners of the lowest pass-blocking and run-blocking grades in the NFL. They allowed pressure in 2.5 seconds or less on 33 percent of their quarterback dropbacks — a mark that ranked dead last and was over five percentage points higher than the next-worst team. Simply put, their line was an atrocity, so the bar for improvement was low.

“A lot of Miami’s moves aren’t ones that we were super high on here at PFF from a contract and pick value standpoint, but it’s hard to deny that they significantly added to the talent up front.”

PFF said Flowers “was serviceable in his first season at guard last season with the Redskins” and ranked 19th among 39 qualifiers at left guard. Karras ranked 20th among 38 centers and relinquished only two sacks.

“They weren’t anything special, but simply getting average play on the interior that can be relied upon is an improvement for Miami,” PFF said.

PFF calls Jackson a project for the left tackle position not only technically, but physically.

“Not yet 21 years old, there’s reason to believe he will continue to improve, but to what degree?” PFF asks. “… Hunt has legitimate power and flexibility, but his lack of quickness may hinder him if he sticks at tackle. From a talent perspective, Jackson and Hunt are upgrades, giving the Dolphins a real chance to field four new starters from their offensive line last season.”

▪ Who will be the best AFC East quarterback in three years?

ESPN debated the issue this summer, and Tim Hasselbeck voted for Buffalo’s Josh Allen “with a three-year window.”

Former NFL cornerback Dominique Foxworth then chimed in: “Absolutely not Josh Allen, the least-accurate quarterback in the league last year. I think it’s Tua [Tagovailoa]. The ceiling is high.

“What they’re doing now for Tua with that coaching staff and general manager is very important, and I think gives him a good situation to succeed. I also think the next guy might be [New England’s Jarrett] Stidham.”

With 87 players on the roster, Miami appears content to sit and wait to see whether teams will even be allowed to bring 90 players to camp. Training camp roster size is expected to be reduced to 75 to 80.

▪ PFF put together a team of players who performed best in the fourth quarter of games with a margin of eight points or fewer (and overtime) and named Kyle Van Noy (and Tennessee’s Harold Landry) as the edge players on that team.

PFF noted Van Noy had the best year of his career with the Patriots in his first year in a full-time edge role, and 12 of his career-high 60 pressures came during those clutch plays.

▪ ABC/ESPN lead college football analyst Kirk Herbstreit on Alabama defensive tackle Raekwon Davis, the Dolphins’ pick at No. 56: “He gets the award for the most intimidating player in college football. [But] he didn’t produce the way he looks. He’s got to be more of a playmaker when he goes into the NFL and live up to the ability he has.”

The Jacksonville Jaguars announced they will play at 25 percent capacity this season, including a Thursday night Sept. 24 home game against the Dolphins.

The Dolphins haven’t announced how many fans they will permit at home games.