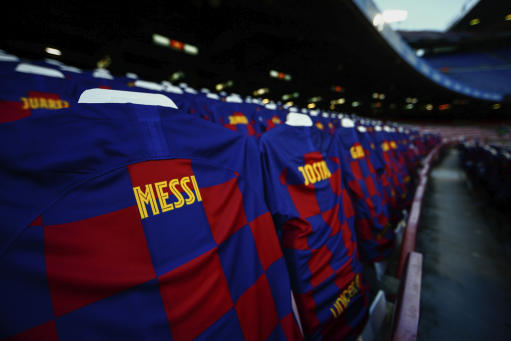 BARCELONA, Spain (AP) — Lionel Messi scored his 700th career goal for club and country before Atletico Madrid came back to draw 2-2 in the Spanish league on Tuesday and deal Barcelona’s title hopes a major blow.

Barcelona’s third draw in four rounds left it in second place, one point behind leader Real Madrid. Madrid hosts Getafe on Thursday with a chance to open up a four-point lead with five more matches remaining.

Barcelona struck first in the 11th minute when Atlético striker Diego Costa inadvertently redirected a corner by Messi into his own net.

Costa’s night got worse shortly after when his penalty was blocked by Marc-Andre ter Stegen. Atlético, however, got to retake the spot kick when a video review determined that the Barcelona goalkeeper had moved off his line too early.

Saúl Ñíguez stepped up instead of Costa on the second attempt and converted to level the score in the 19th.

Messi restored the host’s lead in 56th by coolly scoring a penalty in the “Panenka” style, chipping it softly past goalie Jan Oblak. The goal was Messi’s 630th club goal to go with 70 for his Argentina. It was also his league-leading 22nd goal of the season.

Atlético responded again through the speed of forward Yannick Carrasco, who was tripped by Nelson Semedo and sent Saúl back to the spot. Ter Stegen got a hand on his penalty but not enough to keep it out.

Barcelona’s best chance to get the winner came from Arturo Vidal, who fired a shot just by the post with 20 minutes to go.

The match was the sixth for both teams since La Liga resumed after a three-month stoppage while Spain contained its COVID-19 outbreak. Games are being played without fans and teams are playing every three nights to finish the competition by July 19.