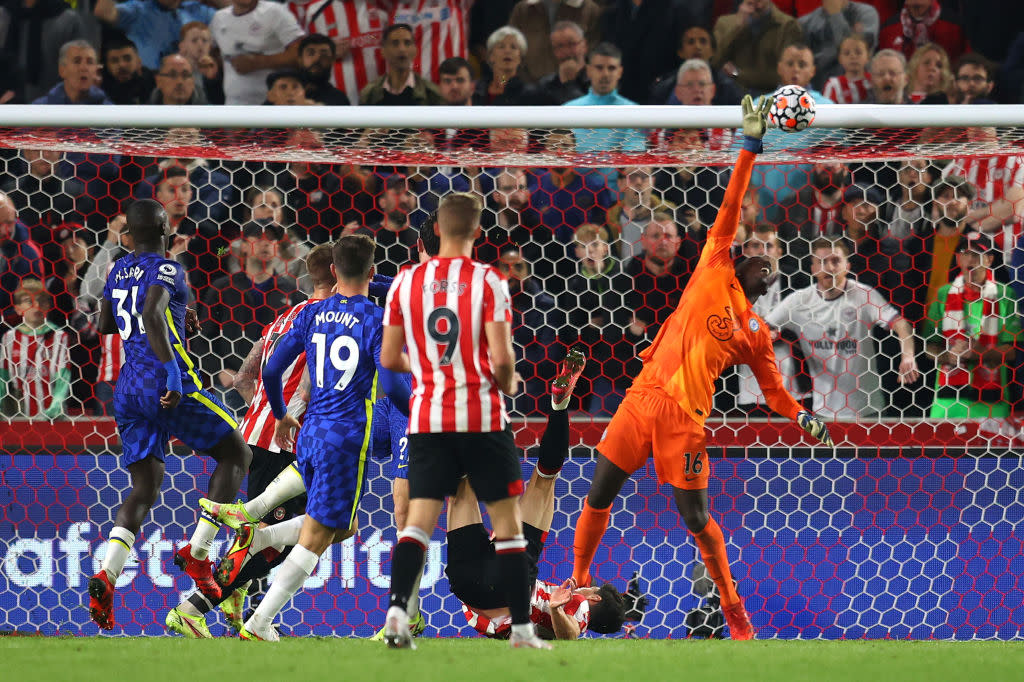 Brentford vs Chelsea was a tight, tense clash as the Blues remained top of the Premier League table after a narrow 1-0 victory.

The Blues should give thanks to goaltender Edouard Mendy.

Ben Chilwell grabbed the only goal of the game, as his fine first-half strike proved the difference for Thomas Tuchel’s side.

Bryan Mbeumo twice hit the post for Brentford, while Mendy was in inspired form to secure the win for the Blues.

With the win Chelsea have six wins from their first eight games of the campaign, while Brentford have 12 points but pushed their illustrious west London rivals all the way.

1. Mendy saves Chelsea: The Senegalese goalkeeper made multiple brilliant saves in the second half and the last one was stunning as he tipped Norgard’s overhead kick onto the bar. Everybody inside the stadium could not believe it. It was a true hands on head moment and this was one of the best goalkeeping displays in recent memory.

2. Brentford will always go for it: Thomas Frank and his side are brilliant to watch. They always deliver drama and they will always go for it. It is not in their DNA to play it safe. Sometimes they will lose, like they did against Chelsea, but they were in this the whole game and only an amazing goalkeeping display denied them at least a point. The Bees are superb to have in the PL.

3. Lukaku, Chelsea stars have off day: Blazing a shot over the bar from close range, despite being offside, summed up Lukaku’s day. He did his work defensively and never stopped trying but along with Azpilicueta, Kante and Werner, they had off days. Instead, it was Malang Sarr, Ruben Loftus-Cheek and Trevoh Chalobah who stood tall and helped Chelsea hang on late on.

Man of the Match: Edouard Mendy

There were some great displays from Brentford, but Mendy was sensational and his saves in the second half won this for Chelsea.

Chelsea had a few chances early on but Brentford were a threat on the break, as Bryan Mbeumo came so close to giving them the lead.

A cross from the right caused havoc and Mbeumo hit the post, then somehow Chelsea cleared and thought they had taken the lead. Werner crossed for Lukaku to slot home but his goal was ruled out for offside.

Mateo Kovacic saw his free kick deflected just over as Chelsea started to take control, and they should have been 1-0 up. Lukaku teed up Werner on the edge of the box but the German striker somehow slotted his shot wide as Chelsea boss Thomas Tuchel could not believe it.

Chelsea did take the lead before the break as a cross towards Lukaku was knocked down to the edge of the box and Chilwell drilled a perfect strike into the top corner to put the Blues ahead.

Malang Sarr, Trevoh Chalobah and Ruben Loftus-Cheek all received plenty of praise from Tuchel as the trio, far from regulars, helped Chelsea keep control of the game.

In the second half Brentford pushed hard to get back in the game. A cross was cleared by Romelu Lukaku who was back defending in his own box, while Ivan Toney wanted a foul on Chalobah as he went down when clean through but nothing was given.

Lukaku blazed a shot over from close range but he was offside, as Brentford took more chances late on and left gaps for Chelsea to exploit.

They almost equalized from a long throw as Edouard Mendy denied Toney’s effort from a flick on, as the Bees kept buzzing.

Late on Mendy denied Mbeumo with another fine save and then in stoppage time he denied Cristian Norgard as he did superbly to tip his acrobatic effort onto the bar.

Mendy was the reason Chelsea won this game.