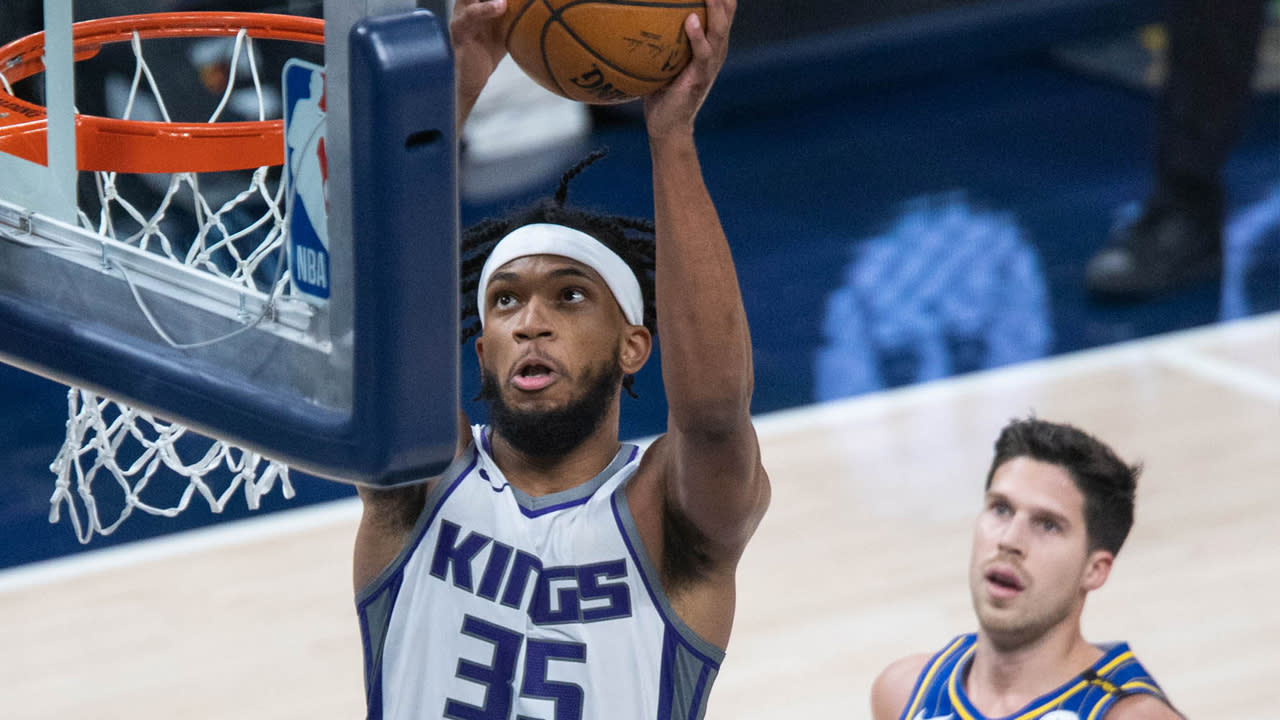 The disappearance of Marvin Bagley is one of the great mysteries of the 2020-21 Kings season. His reappearance and subsequent play is equally as stunning.

After starting 37 of the Kings’ first 39 games, the 22-year-old power forward broke a bone in his left hand March 15. With permission from the team, Bagley left Sacramento to recover in Phoenix, returning a little over a month later.

The former No. 2 overall pick in the 2018 NBA Draft was almost a forgotten man with the Kings. His return to the court was a surprise late in the season, but when Harrison Barnes tweaked an adductor muscle last week, a door opened for Bagley to return to the starting lineup. He’s taken full advantage of the opportunity and the Kings are reaping the rewards.

“When you get into coaching, you love to see young players grow and develop, I keep saying that Marvin’s made huge strides this year,” coach Luke Walton said following the team’s 104-93 win over the Pacers. “Unfortunately, he’s been hit with some unlucky injuries, but this is two out of the last three games that he’s put up big-time performances.”

You could sense Bagley returning to form, especially over the weekend. He posted a solid 23-point, nine-rebound performance against Luka Doncic and the Dallas Mavericks on Sunday. The spring was back in his legs and it was a clear reminder of the potential that he possesses.

Against the Indiana Pacers on Wednesday night, Bagley finally had that moment that is almost three years in the making.

In a must-win game for the Kings, Bagley was absolutely dominant. He ran the floor, attacked the rim and posted one of his best performances as a professional.

“He’s a very confident young man, but for me, it’s all about reps and continuing to play at this level and really, being out there with his teammates,” Walton said.

Like he was shot out of cannon, Bagley scored 14 points in the first quarter. Still dealing with a minutes restriction, he returned to court after a short rest and went right back to work against Domantas Sabonis and the Pacers front line.

Bagley finished the first half with 24 of his season-high 31 points. He barely missed his career best of 32 that he posted during his rookie season, but this was a much more meaningful game for both the Kings and Bagley himself.

“He’s dominating in the post area and I think we need that right now, especially him just getting back from injury,” veteran point guard Delon Wright said. “It’s really impressive for him to just get back and put up these type of numbers.”

This is the player the Kings believed they were drafting back in 2018. Unfortunately, injuries have derailed much of the first three seasons of the former Duke star’s career, but there is still time for him to become a really good NBA player.

Following the win, which is the Kings’ fourth in a row, Bagley joined NBC Sports California for a postgame interview. In the middle of the conversation, Barnes snuck up behind Bagley and doused him with a water bottle.

“He caught me off guard with that one, I definitely did not see that coming, but we’re just having fun,” Bagley said. “It felt good, the game that I had, but overall, just to get another win and to finish off the road trip strong like that.”

The joy is back. For whatever reason, it looks like a weight is lifted off of Bagley and he seems to be enjoying this experience after so many setbacks.

RELATED: Haliburton has no ligament damage, but season likely over

The Kings have some major decisions ahead of them in the offseason, including what to do with Bagley and his $11 million contract for next season. He’s showing flashes of brilliance and it’s clear he has the talent to be a difference maker.

For now, the focus is on winning games and competing down the stretch. The Kings are down to just six games on the season and after the win in Indiana, they trail the Spurs by 2.5 games in the chase for the play-in game.

If the Kings can continue to play hard, get performances like this from players like Bagley and maybe even get a player or two back from injury, then this could be a very interesting finish to the season.