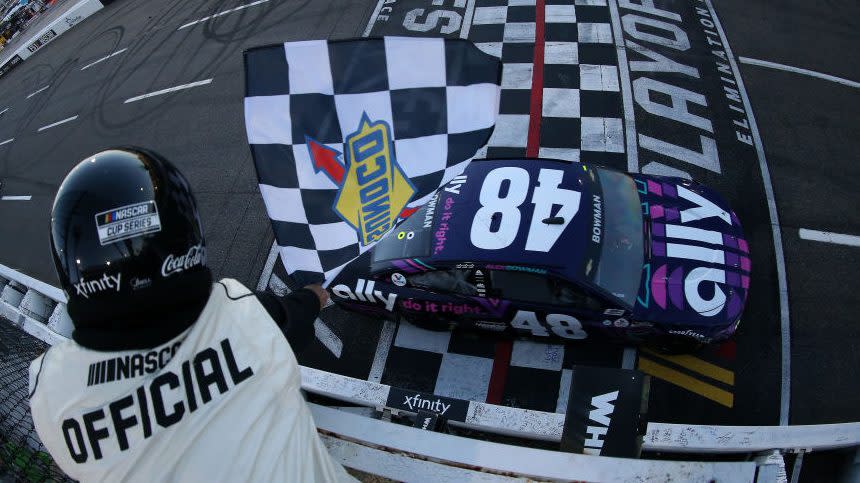 Hendrick Motorsports – Checked all the boxes they needed to Sunday. Alex Bowman claimed his fourth win of the season, albeit with some controversy from his spin of race leader Denny Hamlin in the final laps. Reigning Cup Series champion Chase Elliott clinched a Championship 4 berth to join teammate Kyle Larson in next week’s season finale at Phoenix. William Byron finished fifth and has finished no worse than sixth since being eliminated from the playoffs in the Round of 12.

Denny Hamlin – After interrupting Bowman’s post-race celebration, Hamlin continued to fume on pit road by calling Bowman a “hack.” Despite being saddled with a 24th-place finish, Hamlin still clinched a Championship 4 berth by eight points. It’ll be his fourth appearance in the title race. Will he finally become a Cup Series champion?

Martin Truex Jr. – A tight battle for the final Championship 4 berth went to Truex, who won out over Kyle Busch by three points. Truex was 22 points below the cutline after crashing out of the Round of 8 opener at Texas, but finishes of seventh at Kansas and fourth Sunday at Martinsville were enough to get him to the title race for a fifth time.

Aric Almirola – Sixth-place finish Sunday was his best since his July win at New Hampshire. It was only his fourth top-10 result in a season where Stewart-Haas Racing has struggled for performance outside Kevin Harvick and the No. 4 team.

Kyle Busch – Sunday’s runner-up was his best finish of the playoffs, but it wasn’t enough to get him to the Championship 4. After the race, Busch used the R-word while commenting to reporters about his last-lap tangle with Brad Keselowski. He later apologized on social media.

Team Penske – Keselowski, Joey Logano and Ryan Blaney all failed to make the Championship 4 Sunday. Third-place finisher Keselowski needed to score a win as the final laps unfolded, but he couldn’t catch Bowman in overtime. He was the only Penske driver with a chance at the end. Logano (finished 10th) struggled all day with handling and fire-off speed on his car. Blaney (finished 11th) also couldn’t get close to the front.