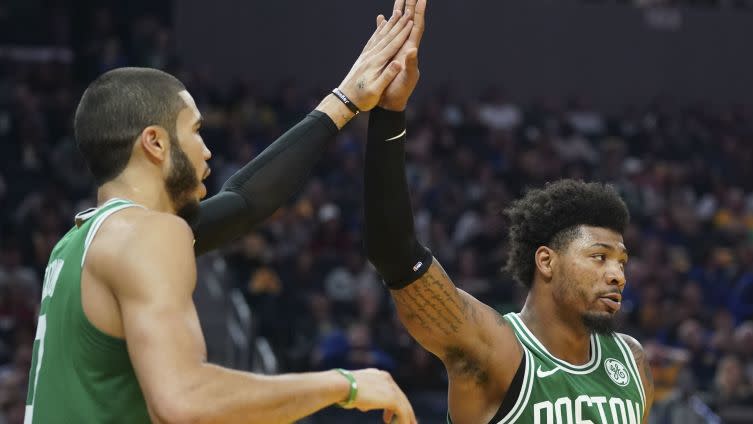 How high is Boston Celtics forward Jayson Tatum‘s ceiling? One of his teammates thinks he has the potential to be one of the all-time greats.

Marcus Smart has watched Tatum grow quite a bit since his rookie season in 2017-18, and he’s optimistic that the young star has an incredibly bright future ahead of him in the NBA.

Smart told reporters Tuesday in a video conference call that he really knew Tatum was going to be something special during the Celtics’ improbable run to the Eastern Conference finals in 2018.

«I would probably say the playoffs in his rookie year. Just the impact he had, just the confidence he played with, and the mindset that he played with, you could definitely see that this guy was going to be special,» Smart said. «He was 20 or 21 at the time. It’s tremendous to see his progression, aiming for the stars and shooting for the moon, literally, that’s him. The things he’s capable of on the offensive end. «I think (one thing that’s) a little under-talked about is his defensive end. He’s 6-foot-9 with a 7-foot wingspan. He’s actually sitting down and guarding guys, let alone coming down on the offensive end and doing what he’s doing.»

«I just think that he’s on the right track to becoming, like I said, if not the best, one of the best players to ever do this in this game.»

It’s not every day that a player receives this kind of praise, and while Tatum still has a very, very long way to go before he can be mentioned alongside the game’s greatest players, it’s easy to see why people are so excited about what lies ahead for him.

Tatum has shown fantastic improvement this season, highlighted by his first All-Star Game appearance and earning Eastern Conference Player of the Month for February. He leads the Celtics in scoring with 23.6 points per game, and he’s also on pace to set career highs in rebounds per game, assists per game, steals per game, blocks per game and more.

If the Celtics are going to make a deep run and potentially reach the 2020 NBA Finals — and some experts think they’re capable of winning the East — Tatum will need to take his game to an even higher level on the league’s brightest stage. Based on what we’ve seen so far from Tatum during the 2019-20 season, there are reasons to be confident he’s capable of meeting that challenge.