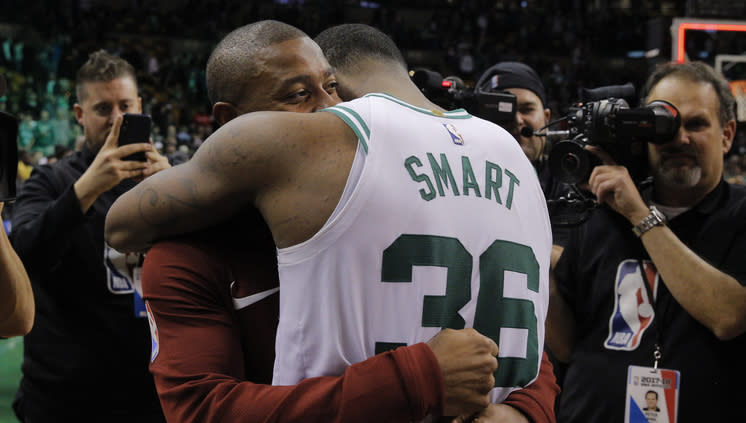 Celtics fans will forever appreciate what Isaiah Thomas did for them throughout his three seasons in Boston.

The 5-foot-9 guard really burst on the scene for the C’s during the 2015-16 campaign, when he played in all 82 regular season games while averaging 22.2 points and 6.2 assists. He was named to the All-Star team then, and again the following season when he averaged 28.9 points while shooting 46 percent from the field and finishing fifth in league MVP voting.

Simply put, Thomas was exactly the kind of spark plug the Celtics needed during those seasons, and it was a shock when he was traded to the Cleveland Cavaliers in the August 2017 deal that brought Kyrie Irving to Boston.

Nearly three years later, I.T.’s contributions haven’t been forgotten by the Celtics fans and players that were by his side during those thrilling seasons.

On Sunday, Thomas quote-tweeted a post from CBS Sports that highlighted his sensational 2016-17 season. He wrote, «NOBODY UNDER 6ft comes close.»

«Best to ever do it under 6′ my brother @isaiahthomas,» he wrote shortly after I.T. posted his tweet.

There’s no denying the immense respect Thomas and Smart still have for one another, as Thomas responded by calling Smart «one of my favorite teammates ever.»

«If you want to win put Marcus Smart in» one of my favorite teammates ever. Real deal best defender in terms of being able to guard 1-5 on any night https://t.co/RWXLi5VuBc

There have been some great players under the 6-foot mark, but it’s hard to argue against Thomas as the most talented of the bunch. If not for the tear in his hip that derailed his promising career, he’d likely still be producing at an All-Star level.

Currently, Thomas is a free agent as he was traded from the Washington Wizards to the Los Angeles Clippers, who waived him three days later.

While we may never witness superstar I.T. again, there’s hope that another team will give him a shot to prove he still has plenty left in the tank.

Marcus Smart: Ex-Celtics teammate Isaiah Thomas ‘best to ever do it under 6 feet’ originally appeared on NBC Sports Boston