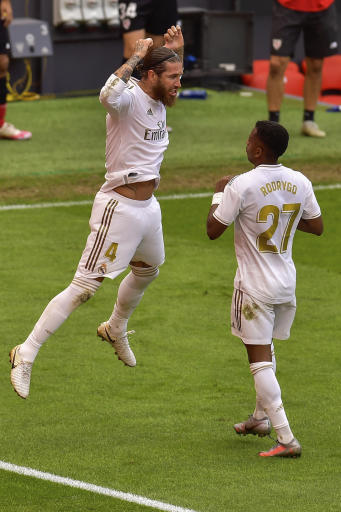 MADRID (AP) — With another decisive penalty kick from Sergio Ramos, Real Madrid extended its perfect run after the coronavirus break and moved closer to its first Spanish league title in three years.

Ramos scored his fifth goal since the season resumed as Madrid defeated Athletic Bilbao 1-0 on Sunday to keep a four-point lead over Barcelona, which beat fifth-place Villarreal 4-1. Luis Suarez and Antoine Griezmann were among the scorers for Barcelona after assists from Lionel Messi.

Ramos converted a 73rd-minute penalty to give Madrid its seventh straight victory and it remained the only team with a perfect record since the league resumed.

»These three points are very important, we knew this was going to be one of the difficult matches we had left,» Ramos said. »This was a key victory to try to put some pressure on Barcelona. We only depend on ourselves.»

It was the third straight 1-0 win by Madrid. It has four matches left as it chases its first league title since 2017.

»We can’t relax or think about the title until we clinch it mathematically,» Madrid coach Zinedine Zidane said. »But I admit that winning seven games in a row is impressive.»

Ramos had already scored a late winner from the penalty spot in Madrid’s 1-0 win against Getafe on Thursday, and he also netted from the spot in the 2-1 win at Real Sociedad last month.

Ramos converted on Sunday after video review determined there was a foul when midfielder Dani Garcia stepped on left back Marcelo’s right foot inside the area. Athletic wanted a penalty for a similar foul by Ramos away from the ball a few moments later, but the game was allowed to continue.

»I’m tired of always talking about the same thing,» Zidane said. »It seems like we only win thanks to the referees, and that’s not true. The players deserve respect.»

Eighth-place Athletic was coming off two straight victories and had won three of its last four matches, with the only setback a loss at Barcelona.

Madrid was without forward Eden Hazard and defender Raphael Varane because of minor injuries. Zidane said James Rodriguez asked not to be in the squad for personal reasons but did not elaborate.

Two-time defending champion Barcelona ended its two-match winless streak with Messi setting up goals by Suarez in the 20th and Griezmann in the 45th. It had opened the scoring with an own-goal by Pau Torres in the third minute, and Ansu Fati netted the final goal in the 87th. Gerard Moreno scored for the hosts in the 14th.

»These points were important to keep us in the fight for the title,» Barcelona defender Gerard Pique said. »We will keep pushing even though we know it’s going to be complicated.»

Suarez’s strike was his 194th goal with Barcelona, tying him with Ladislao Kubala as the club’s third all-time highest scorer, behind Cesar Rodriguez (232) and Messi (630).

Griezmann, back in the starting lineup, hadn’t scored since February.

Messi had a goal disallowed for offside in the 69th and hit the crossbar with a free kick in second-half stoppage time.

Barcelona led when the league was suspended but had drawn three of its six matches since the return, including the last two. It entered the match against Villarreal with coach Quique Setien under pressure because of the team’s poor run of results.

Villarreal had won five of its six matches after the break. It stayed three points behind fourth-place Sevilla, which hosts relegation-threatened Eibar on Monday.

Last-place Espanyol lost 1-0 at home to second-to-last Leganes to stay 11 points from safety.