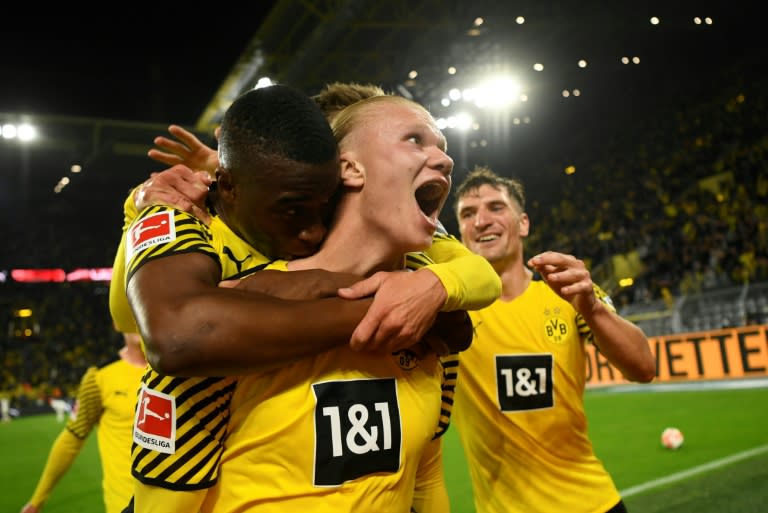 Borussia Dortmund’s goal-scoring «machine» Erling Braut Haaland scored the winner in added time on Friday to snatch a dramatic 3-2 win at home to Hoffenheim in the Bundesliga.

Hoffenheim equalised twice as goals by Dortmund teenagers Giovanni Reyna and Jude Bellingham were cancelled out by Christoph Baumgartner, then Munas Dabbur who levelled in the 90th minute.

However, Haaland made sure of the three points for Dortmund when he smashed his sixth goal this season into the net in the 91st minute.

Haaland has now scored 63 goals in 64 games since joining Dortmund in January 2020.

«He’s a machine, I haven’t got enough words to describe him, but he got us the win and that’s what’s important,» England midfielder Bellingham told DAZN after Haaland’s dramatic winner.

Dortmund got back to winning ways after last weekend’s shock defeat at Freiburg.

«I think we played better against Freiburg, but we had our chances today and we took them – happy days,» added Bellingham.

«We conceded two goals, which is a downside, but we showed some character, which we often get criticised for.»

The match got off to a frenetic start at Signal Iduna Park as Baumgartner was booked after just nine seconds for elbowing Axel Witsel in the face.

With Mats Hummels sidelined by injury, Witsel, normally a defensive midfielder, was playing out of position as a makeshift centre-back.

Hoffenheim striker Andrej Kramaric hit the post with a header after only three minutes but the danger was cleared.

Dortmund broke the deadlock four minutes after the break when Bellingham flicked the ball towards Reyna, who smashed his shot past Hoffenheim goalkeeper Oliver Baumann.

Reyna, who only turns 19 in November, made amends having blown a clear first-half chance when his weak shot was saved by Baumann after a one-on-one situation.

At the other end, Dortmund goalkeeper Gregor Kobel denied Kramaric just before Baumgartner equalised by firing into the far corner.

Bellingham restored Dortmund’s lead with 20 minutes left when he controlled the ball with his thigh and fired home off his left foot before being replaced soon after with a leg knock.

It seemed Hoffenheim had secured a point when Dabbur silenced the Dortmund crowd with an equaliser on 90 minutes before Haaland struck in the dramatic final moments.