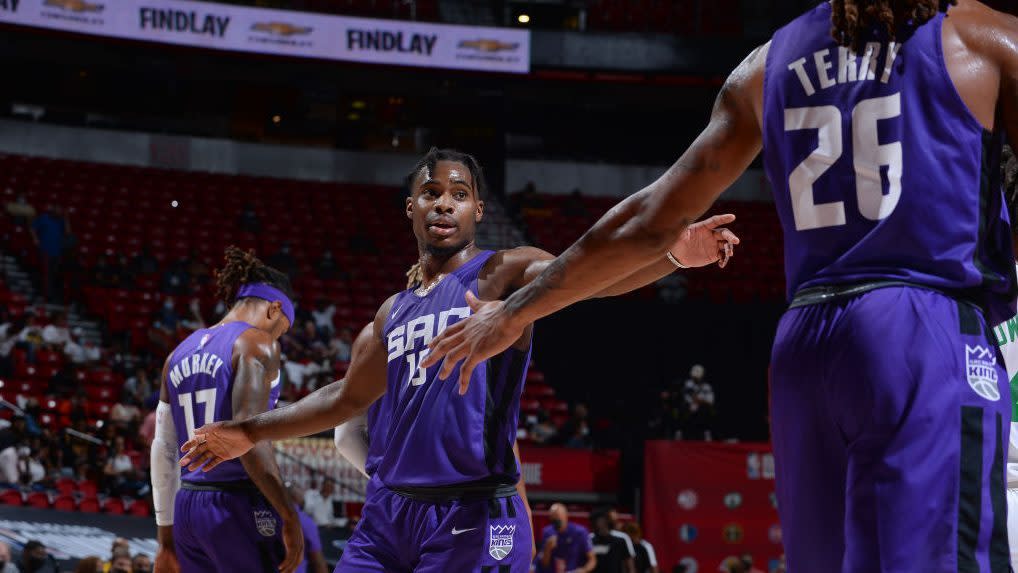 LAS VEGAS (AP) — Louis King slammed home a two-handed dunk with a little more than two minutes left in the third quarter of the NBA Summer League championship game, let out a monstrous roar and promptly flexed with authority.

Fittingly, it was King who dominated for Sacramento and finished with 21 points to help the Kings cruise to a 100-67 victory over the Boston Celtics on Tuesday night in front of a sparse, masked crowd that barely filled the bottom bowl, an uncommon scene for a title game that has packed the venue in recent years prior to the pandemic.

It was Sacramento’s first Summer League title since 2014.

“Our transition, that’s what started it, our defense and transition points, that’s what it came down to,” said King, who started his career in Detroit after going undrafted from Oregon in 2019. “I feel like everything we’re doing now, that we’re doing all summer, and what we’ve been doing is just going to translate into our regular-season team.

“We’ve got new guys, new faces and we just got to trust each other.”

One of those new faces is defensive stopper Davion Mitchell, who was taken ninth overall in last month’s draft and was out to prove the franchise didn’t make a mistake in adding him to an already guard-heavy lineup that includes Tyrese Haliburton and De’Aaron Fox.

“We loved what we saw and that’s why we drafted him,” Kings coach Luke Walton said. “We continue to try to bring a certain player in and the front office has done a nice job, and you watch Davion play and you see him win a national championship, you get his background and how he competes and how he leads and how he works, and that’s why we spent a top-10 pick on him.”

While the Kings got additional contributions from Jahmi’us Ramsey (16), Matt Coleman III (14), and Ade Murkey (10), Mitchell chipped in with nine points but more importantly shut down Boston sharpshooter Payton Pritchard.

Carsen Edwards had 15 points and Aaron Nesmith 12 for Boston. Pritchard finished with just six points after being limited to 3-of-9 shooting from the floor.

“All my life I’ve played with a chip on my shoulder. I’ve kind of always been like the underdog, especially coming to Sacramento hearing that they’re not a really good defensive team,” Mitchell said. “That kind of just turned me on, like I really want to change the narrative, I want to be a defensive team because defense wins championships. So yeah, coming into Summer League I tried to show that and I think I did a really good job of that.”

After the Celtics took a 14-4 lead behind the strong play of Nesmith, who opened the game with eight points, the Kings stormed back quickly with a 20-6 run to take a four-point lead after one behind 10 points from King.

“I didn’t know what to expect out of this game,” coach Bobby Jackson said. “I knew it was going to be a really good game because looking at them on film they play fast, they shot a lot of 3s. In my meetings, I always told the guys they haven’t run across a defense like us, and if we buy into defending and have each other’s backs, the ball is going to fall. It was just an effort on the defensive side of the ball.”

Check out more from Summer League