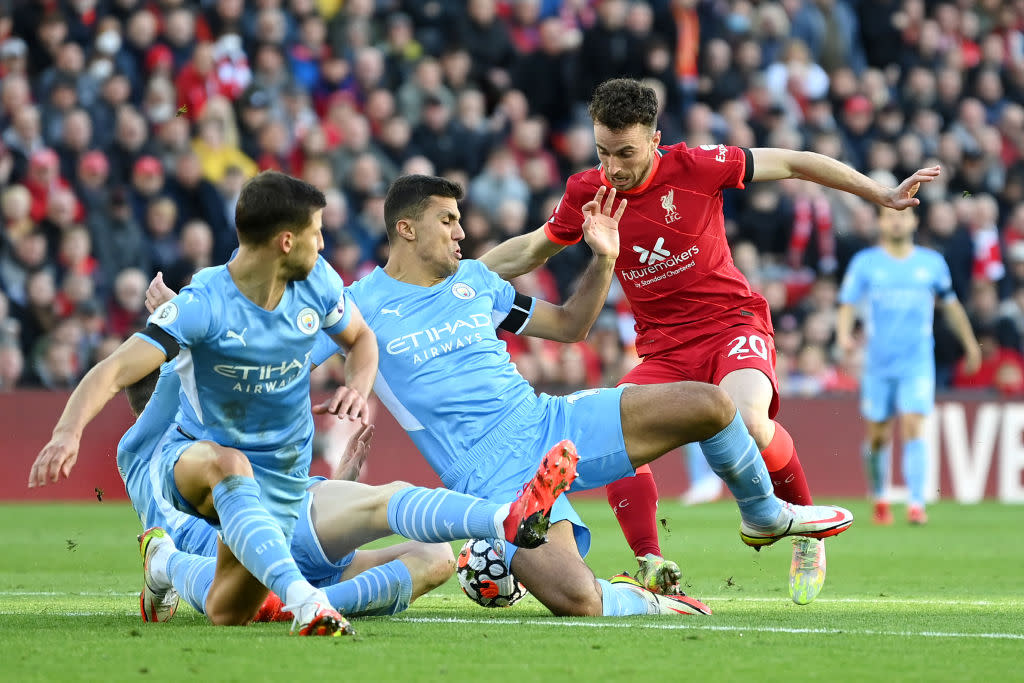 Manchester City and Liverpool will have plenty to unpack following a sensational 2-2 draw at Anfield on Sunday.

Man City dominated a scoreless first half but needed two second-half equalizers to take a point from the Reds, who probably should’ve been down a man for a called foul that could’ve easily been a second yellow card for James Milner.

Mohamed Salah had a goal and an assist, the latter a fantastic pass to set up Sadio Mane but the former an ethereal bit of work in the box of a very good Man City defense.

Phil Foden and Kevin De Bruyne scored outstanding goals for City in a match that delivered all the goods.

Liverpool’s 15 points are one back of leaders Chelsea and one more than third-place City. Surely this isn’t the last we’ve seen of hype between the Premier League’s best (relatively) new rivals.

Three things we learned from Liverpool vs Man City

1. Salah at his very very best: We’ve mentioned that Liverpool’s Egyptian wizard has been overlooked a bit in recent seasons, near the top of the Golden Boot chase last season despite what most pundits would tell you was a down season. Well if his assist on Mane’s goal delivers plaudits to the scorer, his second surely heaps it on Salah; Goal of the season stuff from one of the game’s truly elite creators and finishers.

Furthermore, consider how much joy Joao Cancelo and Man City had on its left in the first half. What Salah forced Cancelo to do in the second, skinning him often in the process, changed the game.

2. Rodri saves the day: There was perhaps no more important play than Rodri’s incredible lunge to block Fabinho’s 87th-minute bid to put Liverpool into the win column. The fact is that Rodri was the best player in Man City’s loss to PSG and was again so critical today. When Kevin De Bruyne’s at his best, Rodri is overlooked behind him. When Ruben Dias shines, Rodri is overlooked in front of him. Give the man his due.

3. What does it mean? That’s the big question here. For Man City to be the dominant team for the first half but leave 0-0 shows that Liverpool can defend but that when both are at their best, the margins are so fine (and probably just favor City given the Anfield crowd). We’ve been underlining the import of intra-top four battles and for City to get a point at Anfield and arguably deserve three after an eight-day span of Chelsea, PSG, and Liverpool is really, truly impressive.

Man of the Match: Mohamed Salah

Goal, assist, and the reason Liverpool went from dominated to in the discussion for all three points.

The first 20 minutes saw players who clearly understood the task at hand but didn’t quite have sharpness after midweek Champions League action.

Man City’s typical surgical passing was off target and even Kevin De Bruyne put a ball out of bounds.

Jordan Henderson mishit a cross and soon had a poor giveaway that led to Bernardo Silva’s electric dribble through the Liverpool defense, which set up Phil Foden. The Englishman took a touch too much and Alisson Becker, himself atoning for an earlier mistake, closed down Foden.

Joao Cancelo, Phil Foden, and Jack Grealish would’ve been licking their lips at the prospect of attacking the Liverpool right side even after it became clear steady James Milner would start in place of adventuring Trent Alexander-Arnold.

The trio ravaged the right side but Milner mostly held firm as Kevin De Bruyne and friends switched the play to the left early and often.

Milner got away with a foul on the edge of the box after De Bruyne released Foden, as the playmaker fought through the challenge before hitting the deck.

The hairdryer works (if there was one)

Liverpool was much, much brighter after halftime, presumably getting so many earfuls from Jurgen Klopp that they required more ear drums.

Diogo Jota forced a good save out of Ederson but Man City would counterattack with the hosts a bit more open for business.

That’s when Mohamed Salah and Sadio Mane made Anfield erupt with the Egyptian’s electric set-up putting Mane 1v1 with Ederson. He didn’t miss.

James Milner was sitting on a yellow card when Bernardo Silva zoomed past Jordan Henderson and cut past Milner, who dragged a leg to take down the Portuguese.

Pep Guardiola was apoplectic that a yellow card didn’t accompany the foul and Liverpool had it 2-1 moments later.

That’s because Salah is lightning and carved up the Man City back line to beat Ederson from a tight angle. Wow.

Liverpool will complain about ex-Reds star Raheem Sterling prone on the turf, but there’s no doubt that De Bruyne’s finish was great, Alisson had every reason to get there, and City deserved a second.